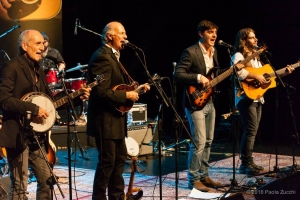 Red Wine is one of the prominent European bluegrass bands, active since 1978, with a style that compasses traditional and contemporary Bluegrass, Country, Gospel, and Swing.

Starting 1984 Red Wine has played all over Europe, performing at major international festivals and playing concerts in Italy, France, Switzerland, Germany, Ireland, Wales, Holland, Slovenia, Czech Republic, and Austria, sharing the stage with the most important bands and acts from the USA and Europe, and gaining strong following everywhere.

Following the huge success of the 30th anniversary celebration concert in Genova, in 2008, Red Wine has started a new yearly adventure in 2009, the Red Wine Bluegrass Party, with international guests like Tim O’Brien, Laurie Lewis & Tom Rozum, Doyle Lawson & Quicksilver, Peter Rowan, and The Kruger Brothers. In the past 2 years the Party has featured a refreshing opening towards other musical genres (Celtic, Dixieland, Old Time Music), with the valuable help of incredible musicians from Italy and Europe.
6
What's This
Advertisement