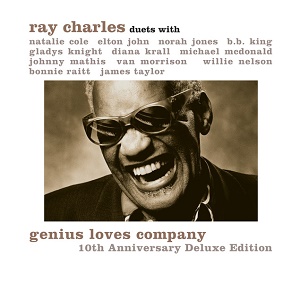 Upon its release in 2004, few could have predicted the extraordinary, game-changing effect that Ray Charles’ final recording would have on both his career and the industry as a whole. To celebrate the 10th anniversary of the legend’s milestone recording, Concord/Hear Music will release deluxe reissues in a variety of formats beginning September 30th, 2014.

One of Charles’ most inspirational and historically significant albums, Genius Loves Company captures the genius of the music icon in his last studio recording pairing him with legendary guest artists including Norah Jones, Diana Krall, James Taylor, Elton John, Willie Nelson and Bonnie Raitt to name a few. The album went on to receive an astounding 8 GRAMMY® Awards, including Album of the Year and Record of the Year. To help launch a then-groundbreaking consumer marketing campaign, Genius Loves Company was tapped as the first original release through the Starbucks Hear Music imprint in conjunction with Concord Music Group. Since its release on August 31st, 2004, Genius Loves Company has been certified multi-platinum with worldwide sales in excess of 5 million copies.

The behind-the-scenes Making of Genius Loves Company documentary reveals the inside story of this landmark musical event, including the historical relationship between Starbucks/Hear Music and Concord Records. The DVD features interviews with Starbucks chairman, president and chief executive officer, Howard Schultz, producer John Burk, Ray Charles Foundation president Valerie Ervin, new interviews and insights from some of the album’s stellar guest artists and unreleased video from the legendary recording sessions. The Limited Collectors Edition builds on the story with the addition of the original motion picture Ray starring Jamie Foxx in his Academy Award®-winning Best Actor performance.

Norah Jones, who teamed with Charles on “Here We Go Again” shares that she was both excited and nervous about singing with one of her biggest idols. “I didn’t want to ruin it with me, [but] I had to do it,” she says in the Making Of documentary. “I would never forgive myself if I didn’t.” Elton John notes that he “got a lump in [his] throat and people in the control room were crying” when he and Charles laid down vocals for “Sorry Seems to Be the Hardest Word.”

Produced by John Burk, Concord Music Group’s chief creative officer, and co-produced by the legendary Phil Ramone, Genius Loves Company garnered critical acclaim upon its release. NPR All Things Considered hailed, “It’s got flashes of fire you wouldn’t expect from such a setting, gems of phrasing that remind you how Ray Charles transformed the wreckage of heartbreak into poignant sound,” and Rolling Stone added, “the tone is reverential and warm, as the Genius sings…”

“Ray was shocked that these people wanted to sing with him,” recalls Ray Charles Foundation president Valerie Ervin. “He just didn’t understand the magnitude of where he was in the industry. As weak as he became…he made sure he gave his best for every artist that was there for him.”

“Ray Charles was one of those rare artists who, throughout his incredible career, had far-reaching impact that forever changed the conventions of popular music as well as the music business,” said Concord Music Group chief creative officer John Burk. “Looking back at the last 10 years, it’s clear that this album was certainly no exception. We are humbled, honored and blessed to have had the opportunity to work with such a musical giant, and we are eternally grateful to Ray for elevating both Concord Records and Hear Music to new heights, far beyond our wildest dreams ten years ago.”

During a career that spanned some 58 years, Charles performed a total of more than 10,000 concerts, and starred on over 100 albums, many of them top sellers in a variety of musical genres. He received the Lifetime Achievement and the President’s Merit Award, is a recipient of the National Medal of Arts, Kennedy Center Honors, and France’s Legion of Honor, received the NAACP Image Awards “Hall of Fame Award” in 2004, and is one of the original inductees into the Rock and Roll Hall of Fame.

He appeared in movies such as The Blues Brothers, and starred in commercials for Coca-Cola, Diet Pepsi and California Raisins, among numerous others. In 2004, the biopic Ray was released for the world to see the historic life and times of the “Genius.” The movie garnered six Academy Award® nominations, including Best Picture, and Jamie Foxx took home the Best Actor award for his portrayal of Ray. Charles’ last public performance was on January 24th, 2002, in Los Angeles, CA. In 1998, Charles received the Polar Music Award, an award given for significant achievements in music.
25
What's This
Advertisement