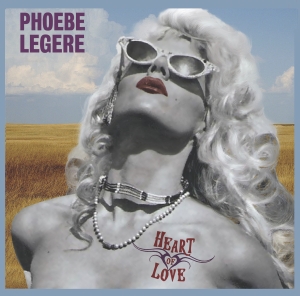 Phoebe Legere (pronouced Feebee Láy - shèairre)
With the release of Heart of Love, Phoebe Legere’s 17th collection of original songs, Legere continues to build on her legendary reputation as an American songwriter, multi-instrumentalist, storyteller and singer.

Studs Terkel at NPR called Phoebe Legere “an American original” whose “beautiful voice will take your breath away.” -NPR.

Phoebe Legere, from an Acadian/Cajun and Native American family, has been playing Ameri-cana with La Famille Legere Band since she was five years old. Her cousin Ray Legere, a blue-grass/acoustic legend joins her on this album.


Legere’s HEART of LOVE album is a paean to the outlaw ecstasy of life on the road. Legere writes songs that are folk-country tall tales. Legere twists grief into humor and counters existen-tial angst with a whoop of joy. Her French-English Cajun Moon begins with Legere singing a chanson about a woman in a hurricane; then she suddenly changes the channel to spin a yarn about riding an alligator while making love and drinking bourbon out of a to-go cup!

Legere’s Native American heritage is the basis for much of her flashing nature imagery: In Blue Canoe Blues we hear her singing in Abenaki, the language of her ancestors. OK Cupid is a song about computer dating with a surprising twist.

Legere, both philosopher and a poet, writes songs that are multivalent Rubik’s cubes of wit, emotion, and wry social commentary. The author of 4 Epic poems, Legere deals with family, romance, disillusion, birth, homecoming and death. On Wrong Honky Tonk Legere plays mas-terful honky tonk piano throughout, and wields her accordion like a spiritual sword.

Legere’s down to earth Lightening Hopkins-influenced blues guitar playing can be heard on the album. She has surrounded herself with some of the best musicians in the business including Dave Malakowski (Savoy Brown Blues Band), Eric McDonald (Mandolin), Ray Legere (violin) Paul Smitty Smith (Lap Steel Guitar) and Dae Bennett (background vocals.)

Legere’s voice goes easily from a “soprano of winsome sweetness” to a “low down blues growl.”

Legere has performed thousands of shows, from Country Fairs to NPR, from Folk Festivals to the Pow Wow circuit, from Songwriter Circles to a CBS Sunday Morning feature when she won First Runner-Up in “America’s Hottest Accordionist Contest” in Branson, Mi.

She has licensed her songs to HBO, Canal PLUS in France, Island Pictures and RAI UNO. She has been covered by the BBC and CBC in Canada. She’s played with Joni Mitchell, Billy Joel, John Hartford, Steve Martin, David Bowie and the Boston Symphony.

The Washington Post raved: “Her voice ranges from a dark and earthy alto to a gorgeous daz-zling high soprano… she combines intelligent lyrics and folk, country, and Cajun into a tasty roots-alternative stew.”

Where Magazine called Phoebe Legere: “A genius who has it all; brains, beauty and a giving heart.”