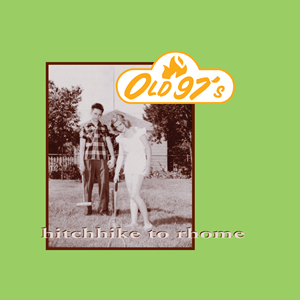 Old 97’s burst onto the alt-country scene in 1994 with their debut, Hitchhike To Rhome. To celebrate this anniversary, Omnivore Recordings is proud to reissue Hitchhike with an expanded release on 2-CD, Digital, and—for the first time—on double LP!

When band member, and set co-producer, Ken Bethea was revisiting the original tapes for this reissue, he discovered a whopping eight extra tracks cut at the album sessions—many of which the band hadn’t even remembered recording. It seemed the perfect time and place to bring those previously unissued songs to light and add the tracks from their first four song demo cassette to round out the early picture of the 97’s.

The 2-CD version of Hitchhike To Rhome contains the original album, coupled with a 2nd disc of those 12 rare and unreleased tracks, many mixed from the original multi-tracks for the first time by longtime Old 97’s engineer Rip Rowan. The double LP (limited edition first pressing on translucent orange vinyl) features the LP on 3 sides with 6 of the recently unearthed tracks on the 4th. The download card included gives the buyer the complete 2-CD program. Both formats include rare photos, memorabilia and notes from Bethea.

From the Too Far To Care reissue complete with demos, (also available separately on vinyl as They Made A Monster), to their sessions with the great Waylon Jennings, Omnivore continues to add to the Old 97’s legacy with this integral, early part of their history and catalog.

Return to Rhome!
23
What's This
Advertisement