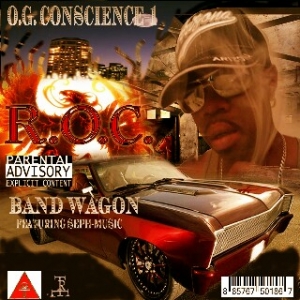 Introducing; The Cure for Hip Hop...

"It's a grip of hustle haters of the P.A. scene, who can't fade the young locsta so they look at me, mean.”Opening verse from "Untouchable Gangstaz"(2007 T.R.E.)....O.G.C-1 formally known as Mr. Insane Locc. From Gangster to Guru, once a troubled youth, now he is a troubled youth counselor and community activist.
Arizona born, California raised, O.G. CONSCIENCE-1 is one of the most prolific lyricist in the Southwest....his style is a mixture of Gangster Rap backed by Scriptural Knowledge. Formally an active member of C.C. Live, a notorious Crip Hood in South Central Phoenix, the O.G. hit the yard for his first time at the age of 19 (gun charges), then again at 21(violation), while inside, he began studying the dictionary, etymology literature and the Bible daily, to broaden his pool of knowledge. Upon his release, C-1 began dominating local rap battles, even appearing on Nationwide Mix-tapes (AM 1100), also The League of Extraordinary Gentlemen (2004 Omega Ent..).With a love for the hood and his people, understanding the power of music and the responsibility of a true leader,C-1set out to deliver music with true to life content and a positive message, being influenced by the greats such as X-Clan, Askari X, Ice Cube and Kool Moe Dee. He has opened up for Afrikaa Bambataa, Jay-o Felony, Vontell, Too Short and Public Enemy just to mention a few. He is currently featured on "Dump It Back, Dem Geez and We Keep It Hot," off of the Insaneridiculo Album by TYCOON 602. With his new single "Band Wagon (N.S.A.)", O.G.C-1 is stepping back in the game, as he says, "with the passion of a preacher and the heart of a soldier"...checking mics and cleaning house…