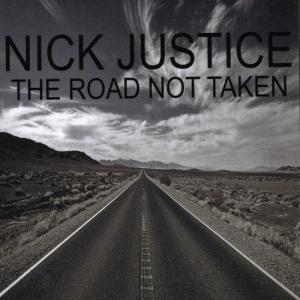 Nick Justice’s unassuming style and down-home demeanor are indicative of an artist who makes no pretense other than to share a sound as natural as it is nuanced. His new album, The Road Not Taken, a follow up to 2017’s excellent The Dance At Dawn, further affirms the fact that Justice is a naturally gifted artist whose allegiance to Americana has nothing to do with simply tapping into a trend. With his burnished vocals and an easy lope and saunter, he proves that he’s more adept at the genre than many of today’s posers and pretenders while coming across as far more convincing.
Of course, by including a song titled “Down Country,” Justice may have been out to underscore that attitude. It paints a convincing tale of two people taking life in stride, happy to hear a Buddy Holly tune while soaking up the serenity of their unhurried existence. Yet, there are any number of other entries that prove equally convincing -- the tender and touching “Song for Caity (A Daughter’s Song),” the sturdy sound of “Take Me Home” and the earnest yet affecting “Judgement Day,” among the many. All make a formidable impression even on the first encounter, a further indication of Justice’s absolute authority when it comes to conveying his emotion and intent.
That said, credit is also due his accompanists -- multi-instrumentalists Richard Bredice and Richard Stekol, bassist James Quinero and drummers Frank Cotinola and Jeff Ward. The arrangements are both deft and delicate, while still as sturdy as they need to be. The sobering “You Didn’t Love Me Anyway” is a fine example; Justice’s decidedly downtrodden vocal gets a sympathetic set up from the band, even as everyone does a fine job of keeping it all in check. It’s a pointed bit of pathos that finds an ideal middle ground.

Yet, for an artist whose style may best be defined as "Country", Justice makes no obvious concessions to that sound. The notable exception appears in the form of “Slipping Away,” a song that finds his vocal adopting a kind of quiver, not unlike Johnny Cash in one of his peak performances. Pedal steel and a bit of twang offer the additional additives. Still, it’s best to eschew categorization and simply see Justice for what he really is -- a superb singer/songwriter who somehow manages to gets better and better with each successive effort.
m even to try. It’s evident at the outset that he and producer/engineer Richard Bredice much prefer to rely on their traditional trappings, ensuring that honesty and integrity resonate throughout. Suffice it to say, whatever attention Justice receives is decidedly deserved. -Lee Zimmerman
7
What's This
Advertisement