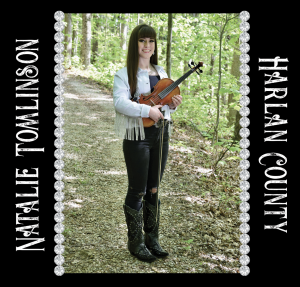 Natalie Tomlinson (b. May 15, 1998) is a fiddle player from the mountains of southeastern Kentucky. Her biggest influences are Kenny Baker, Bobby Osborne, Curly Ray Cline, Paul Warren, Tommy Jackson, Arthur Smith, and Chubby Wise, and she has a deep love for country and bluegrass music. She also plays the guitar, mandolin, and sings.

She has been a member of the young, hard-driving, traditional bluegrass band out of Whitesburg, KY, Sunrise Ridge, since 2015. In addition to performing with bands weekly, she’s worked as a staff musician at the Jenny Wiley Theatre in Pikeville, KY and has performed at places such as the Carter Family Fold in Hiltons, VA, the Kentucky State Capitol in Frankfort, KY, Dollywood, and countless festivals and venues throughout the region. ...When she's not out on the road, you can catch her guesting with other bands or even doing recording studio work! (Notable recordings: 2018: debut fiddle album, "Lucky" 13, which was recorded at the Kentucky School of Bluegrass and Traditional Music and featured instructors Dean Osborne, Scott Napier, Virgil Bowlin, and Bobby Osborne, Sunrise Ridge, and The Price Sisters. It was #1 on the AirPlay Direct Top 50 Global Albums Charts. 2019: she recorded fiddle on "Til Death Due Us Part" and "Back Row Baptist" for Jordan Allen & The Bellwethers on their album, "Weary in Well Doing." 2020: "Thrift Shop Suitcase" for Cody Howard, "Bottom of the Glass" and "Hesitate" for DM & The 1601's. 2021: a second fiddle album, "Harlan County," which was entirely self recorded and produced.)

She graduated from the professional studio artist program at HCTC’s Kentucky School of Bluegrass and Traditional Music with numerous honors in May 2018. She graduated with a bachelor's degree in business management at Lincoln Memorial University in December 2020. She established Natalie Tomlinson Music LLC in 2021, and is very excited to be able to merge business and music. She is available for touring and recording!