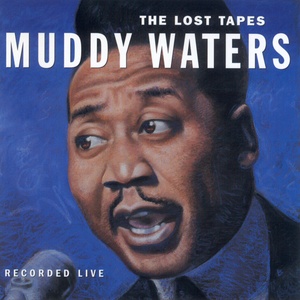 "And the world's gonna know, what it's all about" -- Muddy Waters, singing "Hoochie Coochie Man"

When Muddy Waters first sang these words in 1954, his potent music had made him a "known person" as he put it. By 1971, when these tapes were recorded, Muddy was a blues legend, and the world certainly knew it. He was in his mid-50's touring the globe, and recognized as an icon of American music.

Muddy's presence on a bandstand was riveting and electrifying -- he truly had charisma. His power was undiminished but his depth had increased. His singing was full of pain and joy, savage sex and tender romance, compassionate soul and bitter violence, and loss and redemption. With that much endowment, it's easy to overlook his fiery and frightening electric slide guitar playing, and his ability as a band leader to take a bunch of guys on a stage and inspire a moving spiritual experience for both the band and the audience.

They say "you can't take it with you," but Muddy took all that with him when he died in 1983. The mark he left on the musicians who worked with him, on those who were influenced by him, and on his son Big Bill Morganfield are moving tributes to his power, but we miss the man himself and the blues that he performed. The Lost Tapes bring Muddy back to us again. Older blues fans will have their hearts and memories jolted and newer and younger fans will get a taste of an elemental force of blues.

With the perspective of time we can appreciate that in 1971 the blues' popularity was right in between its roots in African-American life and today's well-publicized world-wide blues scene. The Lost Tapes are a snapshot of that transitional time, Muddy's mid-career performances, and the strong band that was with him. Calvin "Fuzz" Jones, who was Muddy's bass player then and until 1980, remembers that this particular concert stood out in his memory, because the late George "Harmonica" Smith was playing harp with them. That makes this set very special to blues fans who want to hear more of this under-recorded, under-appreciated legend, especially playing with Muddy who brought out the best in anyone who shared the bandstand with him.

We find that though George knew Muddy's classic songs well enough to deliver some of their signature harp parts, he also expressed his own style -- a very highly evolved horn-like phrasing and a talent for inventing melodies to tell complete stories with his solos. His solos on "Hoochie Coochie Man," "Walkin' Through The Park," "Trouble No More," and "Just To Be With You" are the advanced class of blues harp. George Smith's legacy survives in the music of many of today's greatest harp players, whom he mentored. The "rhythm section" core of the band -- Willie "Big Eyes" Smith on drums, Calvin "Fuzz" Jones on bass, and Pinetop Perkins on piano -- have a distinctive rhythmic feel and personality that is the most important element of this mid-late Muddy band after Muddy himself.

The guitar players, Pee Wee Madison and the late Sammy Lawhorn, sound tough and experienced. When backing Muddy, most of the time they pick walking bass patterns or fill in the spaces in the music with answering licks. When they solo, Pee Wee sounds raw and concise while Sammy plays lyrically, with a full-bodied tone. Sammy had a gorgeous deep vibrato that he used often, but he made it with the whammy bar on his guitar rather than with a slide or a finger trill. On "She's 19-Years-Old," there's even a pretty good approximation of a Muddy slide solo, played on Sammy's whammy. Then he goes on to serve up one of the best recorded examples of his own style.

Still, Muddy is the centerpiece -- of this set, of this band, and of the blues. The first word most people use to describe Muddy is "dignified," but at the beginning of "She's 19-Years-Old," Muddy fools with the band and the audience about his weakness for young women. We can feel what a warm, down-to-earth, fun-loving man he was. On the endings to that song and "Long Distance Call," Muddy preaches stories punctuated by the band's answering accents in a way that can never be in the world again.

But if the CD is played through the CD-ROM drive on your computer, you can go back in time and see Muddy perform "Long Distance Call," with his stinging slide guitar, powerful singing, and dramatic preaching. The Enhanced-CD portion of The Lost Tapes also features an interview with Muddy. You may have trouble concentrating on his words though, because in Muddy's speaking voice is a universe of blues, with heaven above and hell below. "Everyone know I don't speak plain!" Muddy used to assert belligerently when folks sometimes couldn't understand his words, embedded in the inflections, twists, personal pronunciations and subtle nuances that were part of his speech. There was more blues just in Muddy Waters' speaking than in the entire souls and music and dreams of most other players.

From The Lost Tapes, "the whole world's gonna know what it's all about" again.