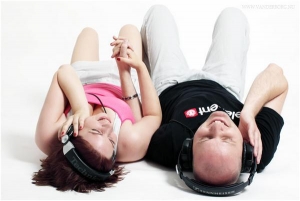 Introduction
The M Lovers are a Dutch Dance duo with a fresh sound. They produce and spin House. The duo consists of Martijn Kuilema and Roos Komar.

Robert Owens about their music: ‘Cool tracks, respect!’
Starfleetmusic about the M Lovers: ‘A hot new House project with Hot Dance music. They give good energy. They have good potential to pack up your dance floors mid do late in the clubs or light up your phone lines during your mix shows’.

Projects
Now the M Lovers are busy with their first album ‘Blue Beats’. It contains their own work and remixes of their cooperation with the successful Australian Dance act Deepface. The album is released on their own record label Dimpleman Records.

The album is promoted to more than 1500 radio stations, more than 1500 club DJs and other sources worldwide. In all, the promotion target for the album consists of more than 5000 members.
In addition to producing, the M Lovers are also preparing to become a successful DJ duo.
The first reactions to the try-outs are highly praised.

Background
Martijn Kuilema is from his early youth busy making electronic music and is spinning since 1994. He won an important DJ contest, he was juror of three different DJ contest and organized his own Dance party. Everyone told him he had the talent. However, the DJ/producer was not able to make it out there. Therefore, the years went by.
Until Martijn met Roos Komar, also know as RosyRoze. Roos was also already involved with electronic music since 1998. As a former girlfriend of an international top DJ, she experienced the Dance science up close. Martijn and Roos were a mach. They decided to produce together as duo Kuilema Vs RosyRoze and in 2008 they started their own record label Dimpleman Records.


Martijn and Roos would like to go international. They have renamed themselves to the more accessible name ‘M Lovers’ and they are co-working with international artists. In addition, their ambition as a DJ duo and their first album Blue Beats should lead to more awareness.
1
What's This
Advertisement