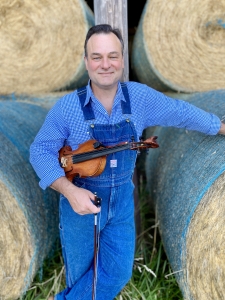 “I absolutely LOVE it. You know there really haven’t been very many really good voices doing that kind of folk stuff in bluegrass for a long time…” ~Carl Goldstein, Delaware Valley Festival, WVUD Newark DE

Founder and director of the Floyd Music School, Mike Mitchell has made his home in the Blue Ridge Mountains for 20 years. An ex-pat of the Jam Band scene, he came to the mountains to learn and know the ancient tones at the true source of Bluegrass and Old-time music.

Nationally recognized for his training of champion musicians and tomorrow’s Bluegrass stars, Mike has also been writing and recording his own music….

With his effortless vocals, distinctive songwriting, and instrumental prowess, Mike continues to capture audiences and carve out his own place in bluegrass.

As a Bandleader, I am releasing my fourth album, the first of 2, for the Turnberry Records Label. As Founder and Director of The Floyd Music School, I am blessed to be a teacher of Bluegrass Music as well as a constant student!

I am also an active member of the IBMA Songwriter's Committee.

I live on a farm, in a one stoplight town, in a one stoplight county in the Blue Ridge Mountains of Virginia--Husband, Father, Teacher, Singer, Songwriter, Recording and Performing Artist, Church Musician, Luthier, Chef, Dog Walker, Woodcutter, Keeper of the Fire, Gardener, Neighbor
26
What's This
Advertisement