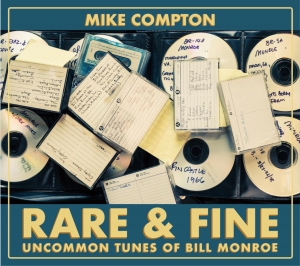 Befriended and mentored by Bill Monroe, the acknowledged Father of Bluegrass Music, Mike Compton is one of today’s foremost interpreters of Monroe’s genre-creating mandolin style.

Mandolin students from around the world make the pilgrimage to his annual Monroe Mandolin Camp in Nashville, TN, where Compton and a select handful of other experts teach everything form the basics of bluegrass mandolin to the most intimate details of Monroe’s endlessly inspiring mandolin style.

Compton’s mastery of mandolin is at once effortless and exceptional. A compelling entertainer either alone or with a group, his skills as a singer, arranger, instrumentalist, composer and accompanist also
make him in-demand as a band member and ensemble player at festivals, clubs and concert halls, recording sessions, music workshops and as a private instructor. With 150 CDS in his discography, including work with Willie Nelson, Dolly Parton, and Patty Loveless, Compton has helped keep mandolin a cool, relevant sound as the modern musical styles ebb and evolve to reach an ever-broadening audience.

A native of Mississippi, Compton picked up the mandolin in his teens and absorbed the area’s native blues, old-time country and bluegrass sounds. He soon gravitated to Nashville, where he helped
found one of the 20th Century’s most admired and influential bluegrass groups, the iconic Nashville Bluegrass Band. He’s also been a part of the John Hartford Stringband, Helen Highwater Stringband,
1942, Compton & Newberry, and other seminal groups.

RARE & FINE: R&F is an effort to bring to life and present some of the more uncommon instrumental works of the late Father of Bluegrass, Mr. Bill Monroe. Over the course of his life, Mr. Monroe wrote hundreds of instrumentals for the banjo, fiddle, and mandolin. He even wrote one for the trombone! Followers of his music are dedicated listeners and fanatic collectors. Many are players themselves. Unfortunately, Monroe passed in September of 1996 and left us with a short list of remaining works. There are only a few more melodies left to play and the tunes on the "Rare & Fine" project are some of them.

Using some of the greatest players of the genre to help me bring these neglected numbers into the light, this project was recorded in the historic Cowboy Arms Hotel and Recording Spa, the former home of legendary studio songwriter and producer, Jack Clement.
Musicians include Michael Cleveland, Shad Cobb, and Laura Orshaw on fiddle, Russ Carson on banjo, Jeremy Stephens on guitar, Mike Bub on bass, and Mike Compton on mandolin.

RARE & FINE-Personal Story:
When somebody says the word "bluegrass" the first thing that crosses one's mind is not usually Mississippi, but that's where I was when it hooked me. I grew up in a household where slick recordings by Ray Charles, Eddie Arnold, Herb Alpert and Richard Strauss dominated the Magnavox tv/stereo side-by-side combo. Hank Williams was the only gritty music on the turntable.

I don't remember really when or where I first heard Bill Monroe, but I do remember it being quite a jolt. The primal sound of his style made me a bit uncomfortable having grown up with more polished recordings, but I couldn't stop listening to him. As time went by, seeking out that sound and trying to understand it and reproduce it became my all-consuming obsession. Not a bad way to keep a teenager out of trouble I guess, but not the most pleasant times for the rest of my family who had to endure hearing hundreds of needle drops from behind my bedroom door!

I played Monroe's recordings to the point I knew what was on each one by the color of the spine, whether I had to tune up or down to synchronize my mandolin with the LPS. There was only one record store in Meridian, MS that consistently had a selection of bluegrass, and I darkened their doorstep frequently. I can remember being so excited with my latest purchases, that I'd have dry heaves on the way home before I could get the disc on the turntable. I had it bad. Almost 50 years later, it's still nearly as intense.

The late 70's found me living in Nashville, TN surrounded by musicians who shared my obsession, and who were collectors of Monroe's music long before I came on the scene. i began meeting and getting acquainted with the people who made the records I listened to, who had only been names in liner notes before. I began filling cassette tapes with everything I could find that related to early bluegrass. Before long I had accumulated a couple suitcases full of tapes of live shows, interviews, noodling, work tapes rehearsals, source material, festival workshops, etc. So much to learn. All these kept me happily preoccupied for years.

When the internet and personal computers came along, it was pretty staggering what was surfacing. I spent many happy hours hunting down and copying performances onto my hard drive and obtaining copies of bluegrass shows from the early 1940's through the 1990's. Volumes of CD's with all Monroe's bands, some with substitutes, some partial bands, videos of significant performances, old country music television shows, some shows with Bill and Charlie reunited, a couple shows of Monroe and Doc Watson at the White House with President Carter telling everybody to be quiet and listen, and a show where Monroe had one of his regular sidemen fill in on mandolin because he had been in an accident and had his arm in a sling. The variety seemed endless.

When Bill Monroe passed in 1996, it took a while before it started to sink in that there would be no more tunes. I thought noble thoughts in the beginning that I would try and carry on the music Bill had put in place, but I realized deep down that I needed to concentrate on the sounds in my own head, and stop trying to be Bill Monroe. That is when my understanding of the style began to fall into place, understanding how the pieces fit together in infinite ways, how to use the vocabulary Monroe had invented, how to play new material in Monroe's style. This only made me more interested and dedicated.

The music in this project comes from material spanning most of Monroe's career. Some of it has been recorded on a couple projects by acquaintances and some on projects that were never released to the public. Some have not been recorded ever. All were penned by Bill Moroe save "Galley Nipper" (He said it is a tune "not from this country", so I assume he picked it up someplace). This is not meant as a solo mandolin recording. The point is to illustrate Monroe's use of single, duo and triple fiddle formats and to celebrate that sound. All I have attempted to do with the mandolin is to play the melodies straight so that people will know how they go and will have a fair chance at learning them if they choose, not to see how many notes I can get on the head of a pin.

I hope that you enjoy the sounds included within these covers. There are still gems about.