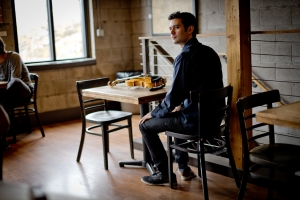 “Barnett has produced a multi-faceted panoply of performances, each a sparkling gem in a cluster of bluegrass (‘Born to Be with You), bebop (‘Dexterity’), chamber grass (‘Piece ‘o Shrimp’), Irish reels (‘The Breath and the Bow’) and other genres.” —Songlines ****

“Mike Barnett is a first-class fiddle player and all-around musician. He’s got the chops and knows how to use them, but he also has something to say, and that’s a rare quality in music these days.” —David “Dawg” Grisman

A fiddle prodigy who received a GRAMMY nod for his Compass Records release, PORTRAITS IN FIDDLES, Mike Barnett returns with a new album of 14 duets he’s titled + 1. The album, originally slated for a fall 2020 release, was delayed when Mike suffered a brain aneurysm last summer at his Nashville home. Friends and fellow musicians rallied, and Mike’s friend and fellow Kentucky Thunder bandmember Jeff Picker started a GoFundMe to assist Mike and his wife, violinist Annalise Ohse, through two successful surgeries and an initial round of rehabilitation in Atlanta. Annalise and Mike are currently doing an intensive round of rehabilitation in Chicago, where, he tells The Bluegrass Situation, he is working to “reconnect his brain to his fingers,” and is “excited about getting the music on + 1 to the fans and community that have offered him so much support.”

Though he’s a Nashville native who became a professional player at a young age as part of Jesse McReynolds’ band, Barnett can still be considered among the recent crop of breakout talents from the Boston roots music scene that produced the likes of Lake Street Dive, I’m With Her and The Deadly Gentlemen, a newgrass outfit where he held fiddle duties from 2011 to 2014. Now relocated to Nashville where he holds down fiddle duties as a member of Ricky Skaggs and Kentucky Thunder, Barnett has been working on +1 over a period of four years. He started recording when he was still living in NYC and was collaborating with fellow artists from his years in the Berklee Music Scene, including Sarah Jarosz; later tracks came once he moved to Nashville and include duets with fellow Nashvillians Sierra Hull, Molly Tuttle and Dominic Leslie in addition to Skaggs.

Drawing on the deep virtuosic talents of the cast of players, the album’s tracks flow seamlessly from traditional American tunes to newgrass with elements of Celtic music, pop and jazz-tinged improvisation thrown in for good measure. From an instrumental sea shanty performed on fiddle and saxophone (“The Breath and the Bow” featuring Eddie Barbash) to “hopped up bluegrass with a little extra thrown in” (“Hybrid Hoss” featuring Cory Walker) to the plaintive vocal melodies of “Righteous Bell” and “Hollow City,” both featuring Sarah Jarosz, + 1 is a dynamic collection that spans cities, countries and genres.

Barnett always intended + 1 to be a studio project. Inspired by some of his favorite duet albums, including two Compass Records releases from the early 2000s – Darol Anger’s DIARY OF A FIDDLER and THE DUO LIVE: AT HOME AND ON THE RANGE with Mike Marshall – coupled with the realization that he enjoyed the musical freedom the duo configuration offers, Barnett began plans for the album. A lot of the music grew out of the time Barnett spent living in Brooklyn.

It was living and gigging in New York City that Barnett started playing a lot as a duo. “The nature of playing around the city is that there are a lot of small venues and I had a lot of friends I enjoyed playing with who were in and out of town,” he says. “It’s one of my favorite contexts to play music in, but it’s a challenging context to record in, especially for a fiddle, which in general, in band context, plays the role of the melodic instrument. In a duo context, when another person is soloing, you have to fill out the music in a different way and get creative there. It was something I thought would be nice to write some music specifically for.”

While in NYC, Barnett’s girlfriend, now wife, got a job offer in Austin, TX. “I decided to follow her but I wanted to stay connected to my NYC friends, so I used writing tunes in these duo contests and going back up there to record, as a way to keep in touch with my friends and keep making music in that scene From there I got a call from Ricky Skaggs to audition for his band.”

Relocating to Nashville, Barnett soon began playing with other young players in the area, including Sierra Hull and Molly Tuttle, and brought them into the project. “I was playing with different folks around Nashville – old friends and new friends,” says Barnett. “I got to a place with a nice cohesive list of songs that represented different genres of music that I’ve spent time digging into and that I love so much, and a collection of people that I feel proud to know and be friends with.” The project lives as “a nice snapshot in time, a time capsule,” he says. Barnett also includes a gorgeous duet featuring Ricky Skaggs on clawhammer banjo and vocals on the hauntingly beautiful medley of old time tunes cleverly dubbed “Little Sisters Melodies.”

With the perspective of having completed the project, Barnett muses, “There’s always the feeling as an artist of looking back on something you started long ago where you want to redo this – it’s kind of nice to look back and see it as a moment in time and let it be at a certain point.”

+1, with its musical breadth, stunning virtuosity and deep musicality, is an album that is sure to stand the test of time and assert Barnett’s place as one of acoustic music’s greatest fiddle players and musical visionaries of his generation.
19
What's This
Advertisement