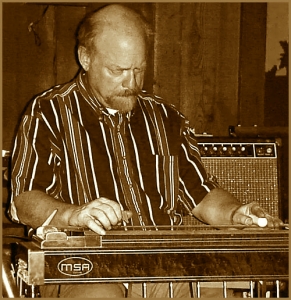 Michael Perlowin started playing the guitar at the age of 13, after hearing the Kingston Trio’s recording of “Tom Dooley.” Originally intending to be a folk singer, Michael soon discovered that his talents as a guitarist far outweighed his abilities as a singer. It was not long before others made that same discovery, and, by age 16, Michael was working as an accompanist in the Los Angeles folk music circuit of the early ’60s. The decade wore on and Michael, like many folk musicians, went electric, playing lead guitar in local rock bands.

In 1969, Michael got married and settled down to working in a music store, teaching music and selling instruments. His dreams of becoming a rock star had faded, but in 1975, his life took an unexpected turn. By virtue of being in the right place at the right time, Michael was offered the lead guitar slot on a working Country and Western band. Michael knew absolutely nothing about country music when he was offered the job, but being experienced in the art of backing up vocalists in other genres, he quickly adapted his skills as an accompanist to the new genre.

When the band broke up, as bands do, Michael started freelancing around L.A. as a lead guitarist on the suburban C&W scene. It wasn’t long before he became captivated by the pedal steel guitar. In 1979, Michael began studying this complicated instrument, leading to a pleasant obsession that continues to this day. Within 6 months of beginning to play, Michael was working as a steel guitarist.

The Urban Cowboy craze of the early ’80s proved to be very fertile ground for steel guitarists. There were more jobs than players, and Michael worked hard for the next couple of years. But the craze also marked the death of the local C&W scene where Michael had honed his skills on the steel. As the auto plants closed up shop, the blue collar workers who had frequented the C&W bars moved away. Clubs were shuttered, and gigs became harder to find. Simultaneously, Michael had tired of playing the same songs night after night, and was searching for something different.

That “something different” turned out to be classical music. After hearing a recording of Debussy’s “The Maid With The Flaxen Hair” by jazz guitarist Johnny Smith, Michael realized his passion to transcribe and play classical music on the pedal steel guitar.

Michael built a home studio, learned how to record music, and dove into years of exploring and perfecting a wide range of classical songs on the steel. His first album, Firebird Suite, is a collection of works by Debussy, Stravinsky, Bartok, Shostakovich, Gershwin, Satie and Copland. His second album is an interpretation of the score of West Side Story, which he recorded in its entirety. The third, Spanish Steel, features music from or about Spain, including Manuel de Falla’s “El Amor Brujo” and Nikolai Rimsky-Korsakov’s “Capriccio Espagnol,” as well as some less well-known pieces.

Michael’s dream is to introduce this beautiful and expressive instrument to the world of classical music, where it is still relatively unknown. It is his goal to become the very first pedal steel guitar concert artist. To that end, he enjoyed making a recent guest appearance with his steel guitar, accompanying two concert artists during their solo performances in the Los Angeles area.

In addition to his recordings, Michael is also the author of a music theory instruction book published by Mel Bay Publications entitled “Music Theory In The Real World: A Practical Guide For Today’s Musicians.”