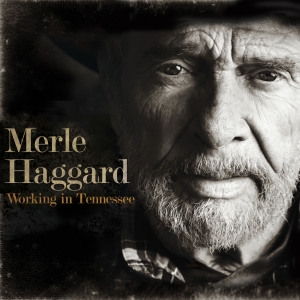 
Loaded with equal measures of ardent passion and provocative observation, Merle Haggard's Working in Tennessee, his second Vanguard release, is a dazzling showcase for the Country Music Hall of Famer's perpetually arresting brand of progressive honky tonk. Produced by Haggard and right-hand man Lou Bradley and recorded at his Northern California Tally studio, the album's swaggering, fluid tone shifts from brooding introspection to bold editorial declarations to Haggard's singular type of ironic, loaded levity. It's a rich mixture that reflects the consistently self-possessed artistry which has long since elevated the California-born singer to country music's apex and ranks Working in Tennessee, with its impressive spectrum of nuance, heat and communicative musicality, as a more than worthy addition to Haggard's legendary body of work.

Haggard's master phrasing and characteristically rough-toned vocals deliver all the resonant interpretive impact he's prized for, his band the Strangers operate throughout at their reliably superlative level, and the contributions from exceptional guitar veteran (and longtime Haggard cohort) Reggie Young lends the set a bewitching, jazz-informed radiance. From the ideal Western swing workout of the title track opener--a wild, left handed bale of sly metaphor that underscores Hag's oft-confrontational relationship with Music City USA-- to the stark, wounded vulnerability of "Sometimes I Dream," to the glorious, cannabis-enriched goof of "Laugh It Off" Haggard displays a high-voltage involvement that pushes each track into the impressive, and intense, territory that's his alone. And, at age 74 and having successfully battled lung cancer, Haggard isn't planning on going anywhere: "I'm doing good. I'm probably in better health than when was I was 70." he said. "I'm lucky to be walking around--lung cancer is usually a death sentence. I thought it was all over, but I've had no further problems."

Working in Tennessee finds the singer as ornery, brilliant, tender and outspoken as ever. Willie Nelson and Haggard's 17 year old son Ben are featured on a kicking re-make of the anthemic "Working Man's Blues" and wife Theresa joins him for a duet on the Johnny Cash-June Carter classic "Jackson." As Haggard said, "I was really close to Cash, if anybody could’ve been close to him, I guess I was. When he died, it really ended an age, an entire era, and we had to do something to show our appreciation." With "Too Much Boogie Woogie" he calls out the current crop of ham-fisted Nashville copy-cats. "Everything sounds like the same damn song." Haggard said. "It's true. Nobody's got anything to say anymore." The stunning "What I Hate" is a vintage dose of blunt social commentary, taking on everything from double-talking politicians to the sinister "chem-trail" controversy to the South's ingrained culture of racism. "I hate to say it, but its true." he said. "That's still going on down there, like it's born into them, bred into them. And it's a damn shame."

Haggard's acute artistic pathology, of course, is borne of a remarkable, troubled personal history. Born in a converted boxcar on April 6, 1937 in Oildale, California, Haggard grew up listening to country radio and basking in the loving embrace of a close knit family. Shattered by the sudden death of his father when he was just nine years old, Haggard slipped into a pattern of resentment-fueled criminality that escalated from minor scrapes with the law into a series of incarcerations at--and escapes from--California Youth Authority lock ups. When he wasn't doing time, he'd get loaded and sing country music, sometimes for tips, mostly just for his own amusement, but by age 16 was good enough that his idol, Lefty Frizzell, famously allowed to guest on one Frizzell's shows at Bakersfield's Pumpkin Center dancehall. Nonetheless, haggard was more intent on raising hell than playing music and the on-going pattern of arrest, abuse by guards, escape, flight and re-arrest climaxed with an incorrigible classification and some hard time at that most infamous penitentiary San Quentin.

Following his release in 1960, the ex-con slowly re-invented himself as a performer and with the encouragement of bassist Fred Maddox (whose catch phrase "Now lay there and wiggle" can be heard at the end of this albums title track) and the aid Bakersfield TV host-musician Herb Henson, Haggard eventually found himself working as bassist for the brilliant Los Angeles country star Wynn Stewart. After Stewart presented Haggard with "Sing a Sad Song," the number that became his first hit in 1964, Haggard quickly established himself as one of the most dominant, creative and important forces in country music. With no less than 38 number one hits and a trove of profoundly influential songs, from controversial flag-wavers "The Fightin' Side of Me" and "Okie from Muskogee" to the excruciatingly sorrowful "If We Make it Through December" to the bruised romance of "Today I Started Loving You Again" ( a song subsequently recorded by some 500 different artists), not to mention countless awards and honors (multiple trophies from the Academy of Country Music and Country Music Association, recognition from the Grammys, BMI), his 1994 induction to the Country Music Hall of Fame and, most recently, the White House ceremony where he was presented with The John F Kennedy Center for the Performing Arts award for lifetime achievement and outstanding contribution to American culture, Haggard's impact on country music remains indisputable.

Such a forthright attitude is all too rare in both American society and country music, but Haggard's often brazen candor potently underscores his incalculable value as an artist. Working in Tennessee is an impressively crafted example of the singer's unflagging creativity, a force that he intends to continue meeting head on. "I’m swinging back in full throttle right now." he said. "Music, it keeps me alive. It makes me breathe better.”