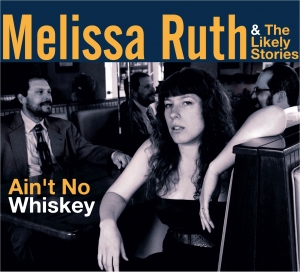 Melissa Ruth and her husband, guitarist Johnny Leal, had been tracking an acoustic follow-up to 2008's Underwater and Other Places for a year when Melissa stumbled upon a 1958 Guild electric guitar at a local music store. Inspired by the guitar and informed by the couple's old jazz and blues collection, Ruth began writing. Once she had penned what turned out to be her title track, Ruth says that a theme for a new record began to emerge.

"All of the songs on the album are about travel or transition, almosts and maybes. Everyone is looking for something: love, acceptance, peace, happiness. The idea behind Ain't No Whiskey is that there are no quick fixes for feelings of longing and desire."

Realizing the intimate nature of her work, Melissa turned to her family. With backgrounds in blues, jazz and funk, her husband Johnny and his brother, drummer Jimmy Leal, were the clear choice for Ruth. "I knew that the songs needed musical soul to support their lyric content and I knew that these boys had soul in spades."

In December of 2010, Ruth and the Leal brothers holed up together, sharing meals and listening to old vinyl. Most of their rehearsal time was spent crafting their sound, a sound they call doo-**** twang. Says Ruth: "Even though we come from entirely different backgrounds, we play from the same place... something that I think is a bit inherent to family bands. We all really believe in letting a song breathe." As the record neared completion, and in keeping with the all-in-the-family theme, Ruth asked her sister Leah and Leah's husband Talon Nansel to sing harmonies on a few songs. Ruth: "It feels really right-on to know that everything you hear on this record was created by someone in my family."

Ain't No Whiskey is the second release on Ruth's own label, Both Ears Records. The first release was 2008's Underwater and Other Places, produced by Hank Alrich of Armadillo Music Productions in Austin, TX. Dubbed homegrown folk-sass, the songs on the album were recorded live and underwent minimal studio production. Additionally, most of the songs on Underwater and Other Places were written by the time Melissa was 21. The record served to showcase the undeniable potential of the young artist.

Canadian-born Melissa Ruth was raised in rural British Columbia on a balanced diet of borscht and Bob Dylan. Melissa and Johnny met in Northern California where they were both studying music. The pair now live in Eugene, Oregon where they are public school music teachers. Jimmy is a fish biologist with the Bureau of Land Management in Oregon. The trio plan to continue to tour in support of Ain't No Whiskey.