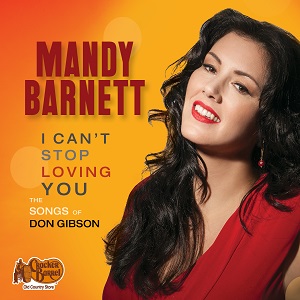 I Can’t Stop Loving You: The Songs of Don Gibson

Cracker Barrel Old Country Store® and Mandy Barnett announce the release ofI Can’t Stop Loving You: The Songs of Don Gibson, Barnett’s newest CD, which will be available on November 11 at all Cracker Barrel Old Country Store® locations, online at crackerbarrel.com and select digital retailers. The release, produced by Barnett, features 12 songs written by Country Music Hall of Fame inductee Don Gibson. The album’s debut coincides with the 10th anniversary of Gibson’s death on November 17, 2003, and fulfills a promise that Barnett made to the legendary singer/songwriter.

“Don, his wife Bobbi, and I became good friends a few years before he passed away,” said Barnett. “He asked me to consider recording an album of his songs, and of course I said yes.  He wrote some of the most-loved songs in country music -- who wouldn’t want to record a Don Gibson song?  Well, it may have taken more than a decade, but thanks to Cracker Barrel Old Country Store®, I have fulfilled my promise to Don and I could not be more excited. I had a great experience with Cracker Barrel Old Country Store® when they released my Winter Wonderland album in 2010, and I’m happy to be working with them again.”

The 12 songs featured on I Can’t Stop Loving You: The Songs of Don Gibson (all written by Gibson) are:

“Mandy Barnett is an amazing vocalist,” said Cracker Barrel Old Country Store Marketing Manager Julie Craig. “Pairing her talent with the songs of the legendary Don Gibson has created an album that we hope will become a classic.”

Gibson, who was inducted into the Nashville Songwriters Hall of Fame in 1973 and the Country Music Hall of Fame in 2001, was a very popular and highly influential country music singer/songwriter in the 1950s and 1960s. As an artist, he charted more than 20 Top 10 hits and released nearly 40 albums between 1958 and 1978 and was a member of the Grand Ole Opry. As a songwriter, he wrote songs that have become timeless classics and have been recorded by a multitude of artists in a variety of music genres. Gibson considered himself a songwriter who sang, rather than a singer who wrote songs.

The title track of Barnett’s album is among Gibson’s best known songs. "I Can’t Stop Loving You" was a No. 7 hit on the Billboard Hot Country Singles Chart for Gibson in 1958, a No. 3 hit for Kitty Wells in 1958, and a No. 1 hit for Conway Twitty in 1972. It also became a huge crossover hit when Ray Charles took it to No. 1 on the Billboard Hot 100, R&B Singles, and Adult Contemporary charts in 1962. Other iconic Gibson-penned compositions on Barnett’s album include "Sweet Dreams" and "Oh Lonesome Me."

Recorded in Nashville, I Can't Stop Loving You: The Songs of Don Gibson features legendary musicians and Country Music Hall of Fame members Harold Bradley, Hargus "Pig" Robbins, and Charlie McCoy, who also played on some of Don Gibson’s original recordings of these songs.

Crossville, Tenn.-native Barnett has been singing since she was five years old. She possesses a full-bodied voice and vocal style reminiscent of the iconic classic country and pop singers. As a teenager, she starred as Patsy Cline in the stage show “Always….Patsy Cline” at the historic Ryman Auditorium in Nashville and has reprised the role at various times.  Barnett released her self-titled debut album on Asylum Records, which received rave reviews from critics, including praise from Time Magazine.  Her second album was the Sire Records release I’ve Got a Right to Cry, produced by the legendary Owen Bradley, which also garnered critical acclaim. Rolling Stone named it the Top Country Album of 1999. She released a Christmas album in 2010, Winter Wonderland, with Cracker Barrel Old Country Store® and Rounder Records.  Her rendition of“Have Yourself a Merry Little Christmas” from that album was prominently featured in the 2012 USA Network television series “Political Animals.” In 2011, she releasedSweet Dreams, a collection of songs made famous by Cline, on the Opry Music label. In addition, Barnett has recorded songs for several motion picture soundtrack albums. Barnett tours regularly and is a frequent guest on the Grand Ole Opry. She has appeared on “The Tonight Show with Jay Leno,” “The Late Show with David Letterman,” “CBS Sunday Morning,” PBS’s “Sessions at West 54th,” and numerous other television broadcasts. To learn more, visit www.MandyBarnett.com, follow her on Facebook atwww.facebook.com/mandybarnettmusic and on Twitter@mandybarnettcom.