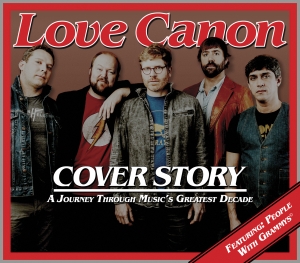 LOVE CANON brings their acoustic-roots sensibilities to the electronic-tinged pop hits of the 80’s and 90’s to create Cover Story, their 4th album, due out on Organic Records July 13, 2018. With Cover Story, LOVE CANON delivers a fresh set of classics, crossing genres to recount music of decades past from the likes of Peter Gabriel, Billy Joel, Depeche Mode, and Paul Simon. The self-produced album hosts a plethora of special guests including Jerry Douglas, Aoife O’Donovan, Keller Williams, Michael Cleveland, and Eric Krasno, among others.

The band’s diehard fans are music lovers first and are drawn to the charismatic and wide-ranging vocal stylings of lead singer and guitarist Jesse Harper matched with banjo master Adam Larrabee, mandolin pickin’ by Andy Thacker, Darrell Muller holding down the low-end on standup bass, and the slick sounds of resonator guitar king Jay Starling on the Beard MA-6. It’s acoustic rock! Acclaimed fiddler Alex Hargreaves [Turtle Island Quartet, Sarah Jarosz] does all of the fiddling on this record with the exception of two tracks, and he occasionally joins them on tour.

As seasoned virtuoso string players who have been touring the mid-Atlantic since 2010, LOVE CANON stays true to the approach, arrangements, and keen artistry of these nostalgic hits. Cover Story was engineered by Rob Evans at Dave Matthews Band's Haunted Hollow Studio in LOVE CANON’s hometown of Charlottesville, Virginia and mixed by Wayne Pooley, Bruce Hornsby’s Engineer/Producer. Cover Story is a follow up to the band’s previous efforts, Greatest Hits Volumes 1-3.