Lorraine Jordan & Carolina Road - I Cannot Bring Them B 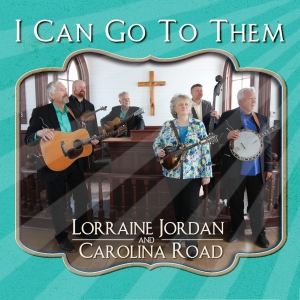 Lorraine Jordan & Carolina Road are excited to announce their brand new Gospel single, “I Cannot Bring Them Back.” The song is a powerful acapella recording that showcases the award-winning band’s tight harmonies, with Carolina Road member and Bluegrass Cardinals / Doyle Lawson & Quicksilver alumni Randy Graham singing lead. It will be featured on the group’s forthcoming all-Gospel project coming later in 2021.

“I first heard this song on a recording by the Forbes Family and was immediately taken by its powerful message to anyone who, like myself, has lost loved ones,” explains Carolina Road member Randy Graham. “I have sung this song at the funeral of many friends and vowed if ever given the opportunity, would record and share it with the world.”

“I Cannot Bring Them Back” was written by HW Van Hoose, and was recorded in Carolina Road’s home state of North Carolina. Randy Graham’s voice shines throughout, channeling an array of different genres ranging from Bluegrass to Roots to Southern Gospel. The band’s decision to record the new single acapella highlights a different side of the band which has rarely been seen over the years. The tone of the song gives an inspirational and occasionally haunting vibe, comparable to Bluegrass icon Ralph Stanley.

"I'm so excited about putting out the first ever acapella song from Carolina Road. When I first hired Randy Graham all I could think about is how much great gospel music he had put out with the Bluegrass Cardinals and Doyle Lawson,” says Lorraine Jordan. “He has the voice made for that sound. I knew I had two great baritone singers within our band in Ben Greene and Kevin Lamm. However, where would we find the bass vocal part? It turns out my lead singer Allen Dyer has turned into a fantabulous bass singer. So get ready for something that has been missing from our song list to really stand out!"

Simultaneously, Lorraine Jordan & Carolina Road are charging forward with their latest album Bill Monroe’s Ol’ Mandolin.” It features the lead single title-track, which went on to become a huge No. 1 hit for the band and one of Bluegrass’ biggest recordings of 2020. The follow-up single, “They Call It Bluegrass” continues to create waves at radio, as its ascend continues on Bluegrass Unlimited National Airplay Survey. Earlier this year, Pinecastle Records partnered with the Bluegrass Jamboree to give one lucky winner a LOAR LM-310F Mandolin.

Fans can join the journey and keep up with all things Lorraine Jordan & Carolina Road by visiting the group’s official website www.carolinaroadband.com for the latest news stories, upcoming tour announcements and more. Also, check out what Lorraine’s got cookin’ on her official FB page for Lorraine’s Coffee House & Music, featuring weekly concerts from Bluegrass music’s hottest acts and beyond!