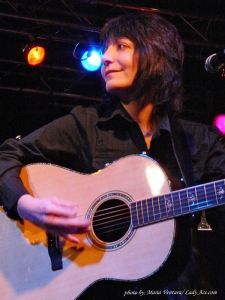 Rich alto vocals, polished award winning lyrics and tightly woven harmonies are the hallmark of Loretta Hagen's musical career. A 2011 winner of the New Jersey Folk Festival Songwriter Competition, Loretta recently released her third CD, Mud and Stone, featuring uplifting heartfelt ballads, playful up-tempo country swing, and cool bluesy grooves. Hagen, a New Jersey-based singer-songwriter brings her songs to life with gentle sincerity and tongue-in-cheek musings through her depiction of the human experience in today's economic and social climates. Loretta's melodies leave folks feeling as if they are listening to their own stories set to song.

Hagen has shared the stage with Roger McGuinn, John Gorka, Jonathan Edwards, Johnny Winter, Richie Havens, Gretchen Wilson, and Kim Richey, to name a few, as well as headlined many of her own shows.

Following her critically acclaimed CD Something More, co-produced by Pat McInerney (Nanci Griffith), Hagen released Sundown Till Dawn, a CD that garnered rave reviews and radio play across the country. Sundown Till Dawn is extremely personal, with the title track written about her mother who suffers with Alzheimer's Disease. The emotionally charged ballad is included on the soundtrack of a film called "10 Mountains 10 Years" chronicling the journey of a group of mountain climbers who are raising awareness about the disease.

Loretta performs primarily with her trio consisting of husband/guitarist Gary Hagen and harmony vocalist and djembe player Linda Lambiase, or with full band if requested.

Reviews
"Mud and Stone will be a treasure for weeks, months and years to come." - Ron Olesko,
WFDU-FM 89.1, Traditions Radio Show

"Loretta Hagen writes songs that sound like they can come from the Heartland, but they also really come from the heart." - John Platt, WFUV 90.7 FM

"Loretta has a magnificent voice and is a terrific performer! Great new CD!" - Jim Monaghan, WDHA-FM, All Mixed Up Radio Show


"Loretta's manner and voice are imbued with such quiet, unassuming grace that you don't realize at first that she has completely stolen your heart!" - Laura Foord, Heights House Concerts

"[Loretta's been] blessed with ... an uncanny gift of being able to write songs about everyday life which tug on the heart strings" - Sol Zeller, Borderline Folk Music Club