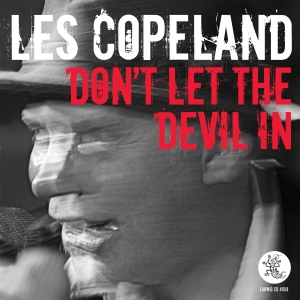 Les Copeland, a brilliant guitarist with diverse tastes in music, met Honeyboy Edwards at a festival in British Columbia in 2003. Honeyboy came home to Chicago and told his manager – Earwig Music CEO Michael Frank, about Les and encouraged him to contact Les, who was keen to book Canadian gigs for Honeyboy. That led to multiple tours and Michael’s dedication to recording Les, to bring to a global audience Les’s magnificent guitar playing and his cool tunes. Les’s Earwig debut Don’t Let the Devil In came out in 2010, followed by To Be In Your Company in 2014 and One More Foot in the Quicksand. Les is a great jazz player, so his next Earwig album will have some jazz guitar as well as more of Les’s blues and Americana songwriting.
https://airplaydirect.com/music/lcdontletthedevilin/
https://airplaydirect.com/music/LesCopelandToBeInYourCompany/
https://airplaydirect.com/music/OneMoreFootInTheQuicksand/

One of British Columbia’s finest blues artists, Les Copeland has always played guitar. Primarily self-taught, his unique sound has developed out of a rich mixture of influences including blues, jazz, Spanish flamenco, pop and classical music.

The call of the blues beckoned when Les was just eleven. Capitol Records was giving away a free copy of Delta blues great, Mississippi Fred McDowell’s latest recording, “London Calling” to anyone who sent in a coupon. The lean sound of one of the tracks, “Red Cross Store”, set destiny in motion and Les on a lifetime journey down the road to the blues – all for the price of a stamp.

From down home Delta to uptown Chicago blues, Les can improvise anything. He started his career as a country blues guy with a bottleneck stuck on one finger. By adding material by jazz guitarist, Wes Montgomery and Chuck Berry to his repertoire, he developed great versatility and chops that would have sent his idol, Robert Johnson, back to the crossroads for another meeting with the devil. Disguising his age so that he could play in Vancouver Island clubs, Les was a professional by the time he was fifteen. Almost immediately, he stepped into a leadership role by fronting the Les Copeland Band, followed by Les Copeland and the Red Hot Ramblers. Both of Les’ groups rocked many a tavern in the region, and played at most of the major blues and folk festivals in the Pacific Northwest.

Les has earned the respect of some of best bluesmen in North America and he is known in western Canada for performing with and promoting legendary blues artists such as Honeyboy Edwards, Jimmie D. Lane, Sonny Rhodes, Jimmie Lee Robinson and others. Subsequent generations of up-and-coming string-benders are thrilled that he has made his talents as a guitar teacher available. Currently residing in Vernon, BC, Les is kept busy touring and playing local gigs, and is sometimes joined by his son, Sonny Copeland.

Les began working on a new album for Chicago based Earwig Music Company in 2009, which was released in May of 2010. It showcases Les’ fine finger picking, melodic sensibility and chordal finesse, and his wry and ironic lyrical observations about everyday people. Blues legend Honeyboy Edwards, with whom Les has toured in Canada for 14 years, guests on guitar on 2 tracks, and Honeyboy’s manager Michael Frank plays harmonica on 3 tracks. This cd is a healthy dose of Americana roots and blues, done Les’s inimitable way.
35
What's This
Advertisement