Doyle Lawson and Quicksilver "Sing Me A Song About Jesu 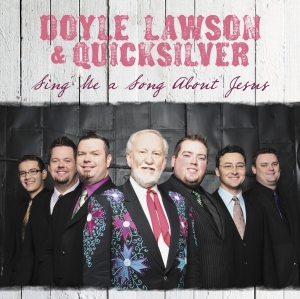 With nearly 40 albums to their credit, Doyle Lawson & Quicksilver have multiple Grammy, Dove, ICM, IBMA and SPBGMA Award nominations, and are 7-time winners of IBMA’s Vocal Group of the Year. Lawson is reigning SPBGMA Mandolin Player of the Year, and Doyle Lawson & Quicksilver are the reigning Inspirational Country Music Association (ICM) Vocal Group of the Year, crowned in October 2012 at Nashville’s Schermerhorn Symphony Center, on the heels of Lawson’s induction into the International Bluegrass Music Hall of Fame at the Ryman Auditorium on September 27, 2012.


A native Tennessean, Lawson was honored in February 2012 by Governor Bill Haslam and the State of Tennessee for his contributions to the state and America through his music (Senate Joint Resolution 467).


Lawson was heralded by journalist Craig Havighurst as “one of music’s lions” following his band’s performance at the 2011 IBMA Awards Press Conference in Nashville. Of Doyle Lawson & Quicksilver’s performance — which garnered three standing ovations from a sold-out crowd in Nashville — Havighurst wrote: “There was no question who was going to close the show. Doyle Lawson is one of music’s lions at this point, and when he came out in perhaps the most beautiful western jacket I’ve ever seen… he was a holy vision. … When DLQ, in quartet mode, nailed the final chorus of the a cappella gospel song “He Made It All Right,” I swear we were mainlining the holy spirit. You know how the word awesome gets overused and misused? Here’s where it applies.” (http://www.musiccityroots.com/passionate-precision)


Legendary in the Bluegrass genre and called a “mandolin virtuoso” with “perfectly silken harmony” by The New York Times, Doyle Lawson broke new ground in 2011 with a benchmark Children’s Hospital and Arena Tour, the first tour of its kind in any genre, combining National Anthem performances at major sporting arenas with performances for boys and girls at Children’s Hospitals in the same cities or regions. Doyle Lawson & Quicksilver performed for nearly 108,000 people during six games in 2011 alone — not including Live broadcast audiences for the NBA and NCAA games — as well as for countless children, families, and staff in visits to children’s hospitals. DLQ sang their first NASCAR Anthem in 2012, kicking off Sprint All-Star Weekend at Charlotte Motor Speedway, NASCAR’s second largest track with 165,000 screaming fans, as they performed the National Anthem for NASCAR’s Education Lottery 200 in May, with other superstars on hand for the weekend including Tim McGraw and Blake Shelton. Pretty impressive numbers and company from the little boy from Kingsport, who grew up to be a LEGEND.
7
What's This
Advertisement