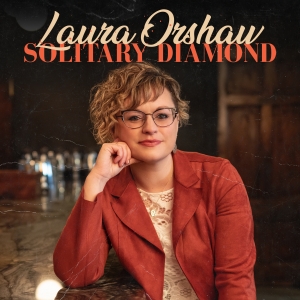 
I CAN'T SETTLE DOWN

is the single from Laura's upcoming album Solitary Diamond.


"I used to think of myself as a homebody, but in the past few years I’ve realized that I love waking up on the tour bus, not knowing exactly where I am until I walk out the door. This sentiment paired with the square dance fiddle tune melody is what drew me to this song. A couple of my fiddle heroes, Jenee Fleenor and Brittany Haas, joined me to help create a rhythmic “wall of sound” that’ll make you want to bounce across the dance floor!"

LAURA ORSHAW (feat. TREY HENSLEY): ON HER OWN

“Laura Orshaw has firmly established herself as a significant emerging artist in the arena of traditional American music... An extremely talented musician with unlimited potential."
~ Bluegrass Unlimited

“This is a fiddler of seemingly boundless energy. With finesse, style and a contagious joy, Orshaw attacks each piece.”
~ Dirty Linen Magazine

“Laura Orshaw is that rare player who certainly has the chops, but also plays with great emotion and drive."
~ Sing Out!

GRAMMY nominated fiddler and vocalist, Laura Orshaw, has toured throughout the United States and Canada with Danny Paisley and the Southern Grass, the Tennessee Mafia Jug Band, Jenni Lyn, mandolinist of Della Mae, Alan Bibey and Grasstowne, and her current band the Po’ Ramblin’ Boys. Laura has also performed with Del McCoury, Ricky Skaggs, John Scofield, Sarah Jarosz, Tony Trischka, Becky Buller, and Darol Anger among others. Her music has been featured on Del McCoury's SiriusXM radio broadcast, Hand Picked with Del, and in Bluegrass Today, Vintage Guitar Magazine, Sing Out!, and Dirty Linen. According to Bluegrass Unlimited, “Laura Orshaw has firmly established herself as a significant emerging artist in the arena of traditional American music... [she is] an extremely talented musician with unlimited potential.” Laura is also a highly sought-after instructor who has taught numerous camps, workshops and kids academies, and started teaching weekly lessons to adults when she was just 12 years old.