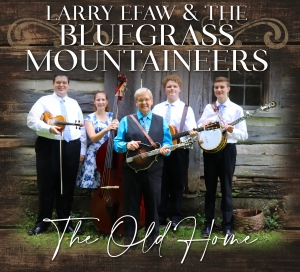 Traditional hard driving Bluegrass Band
Larry Efaw started playing the mandolin at the age of 7. He soon joined his father's band, Edward Efaw and the Bluegrass Mountaineers. Larry had many opportunities to join national bluegrass bands over the years, but he stayed loyal to his dad. Ed continued to play through his 80s and only recently retired from performing on stage. During Larry's musical career, he has appeared as a guest with Dailey & Vincent, Rhonda Vincent, Dr. Ralph Stanley, Doyle Lawson, Bill Monroe, Jimmy Martin, Del McCoury, the Lewis Family, and Goldwing Express to mention a few. Larry has since recorded several albums and is currently releasing his 10th project through Bell Buckle Records, "The Old Home."

Larry is one of the most respected men in the bluegrass music industry. In 1987 he started promoting bluegrass music in Ohio. Larry and his wife of 38 years Lisa have promoted bluegrass music in Perrysburg and Greenwich. They have also been event producers for First Quality Cruises, Travel-Bluegrass Cruise, Maumee Bay Bluegrass Festival, Lake Wapusun, Play Pen Park, Clay's Park, Paradise Lakes Park, and the O.J. Work Auditorium at the Springfield High School for over 20 years.
During his career, he became great friends with Dr. Ralph Stanley. Ralph performed on several of Larry's C.D.s.

The Bluegrass Mountaineer's live show offers a variety of music to their audiences by mixing their show with elements of the Louvin Brothers, the Lewis Family, the Osborne Brothers, Lester Flatt, Jimmy Martin, and the Stanely Brothers, and many others.

She Left Me Standing on a Mountain

Music in the Mountains - Volume 1

Live in the Mountains - Volume 2

Leave This Town Behind You

Are You Waiting Just for Me? Living a City Life