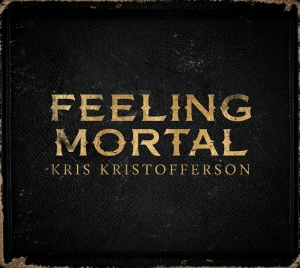 “Nothing could kill me,” he says, recalling his 1960s days in Nashville, when he roared for years on end, somehow finding time amidst the chaos to change the language of country music. “I was rolling cars and wrecking motorcycles, drinking and doing everything I could to die early. But it didn’t work.”

Didn’t work at all. Kristofferson is 76 now and on his 28th album, the aptly titled Feeling Mortal.

Kristofferson is a Country Music Hall of Famer who ranks among the most versatile of American talents. He’s been a Golden Gloves boxer, a Rhodes scholar, a college football player, an acclaimed actor, a military officer, a helicopter pilot, a Grammy-winner, a screw-up and an icon, and now he finds himself releasing the third Don Was-produced album in a twilight years trilogy. Feeling Mortal follows 2009’s Closer To The Bone and 2006’s This Old Road in examining hard-won grace.

“Wide awake and feeling mortal,” he writes on the title track. “At this moment in the dream/ That old man there in the mirror/ And my shaky self-esteem.”
“Going back to the beginning, the songs have been reflections of where I was at that point in my life,” he says. “I always try to be as honest as I can in the songwriting, otherwise there’s no point in doing it: I might as well be doing an advertising job or something. And what I’m finding, to my pleasant surprise at this age, is that I’m more inclined to laughter than tears. I hope I’ll feel this creative and this grateful until they throw dirt over me.”

Kristofferson did not always imagine this would be so. “If I look like a mean old man, that’s what I am,” he sang, back when he was still immortal and when he was sometimes a mean-feeling younger man. But now he’s mostly truthful and thankful, as he sings, “For the laughter and the loving/ That I’m living with today.”

That doesn’t mean Feeling Mortal works as anyone’s greeting card of soft-peddled feelings. “Just Suppose” is another look in the mirror, a negotiation with shame’s reflection. “Castaway” is a cry of the heart, and a memory of a long-ago scene Kristofferson witnessed from the air, when he was flying helicopters over the Gulf of Mexico. And “My Heart Was The Last One To Know” is a harrowing old song, written by Kristofferson and genius poet/author/cartoonist/songwriter Shel Silverstein and previously recorded by Connie Smith.

“Shel was the only person I consistently wrote songs with,” Kristofferson says. “He was a fantastic writer. We did about a dozen songs, and usually he’d write down some titles and a description of what he was thinking about, and I’d go off and come back with a song.”

The album ends with “Ramblin’ Jack,” a song ostensibly about Kristofferson’s folk-singing friend Ramblin’ Jack Elliott. Kristofferson approached the song as something of a self-penned co-write, inspired and begun by his younger self and finished in the present and mortal day. The second verse is the new one: “And if he knew how good he’d done/ Every song he ever sung/ I believe he’d truly be surprised.”

“Ramblin’ Jack’s one of those people whose whole life was music,” Kristofferson says. “He’s like William Blake and Bob Dylan and other people who just believed and lived for whatever poetry they could come up with. That’s probably the thing I was trying to be.”

In the Nashville beginning, Kristofferson threw away a promising military career in favor of life as what he sometimes calls, “A songwriting bum.” He had excelled at most everything he’d ever tried, save for singing and songwriting, but it was the singing and the writing that called to him. He wound up penning classics including “Me and Bobby McGee,” “Help Me Make It Through the Night,” “Sunday Morning Coming Down” and “For The Good Times,” as well as a slew of other empathetic, incisive gems. Kristofferson—along with contemporaries Tom T. Hall, Mickey Newbury, Willie Nelson and John Prine—enhanced the scope of country music songwriting, focusing on layering, nuance, empathy and emotional truth.

“A major reason for Kris’ enduring popularity is that he’s always been very honest and open about revealing his inner life,” says producer Don Was, who has worked with Kristofferson for the past 17 years. “‘Sunday Morning Coming Down’ is a brutally frank, first-person narrative that just happens to hit a common nerve among millions of people, and that’s why Kris is such a great artist. I suspect a whole lot of folks will be able to relate to Feeling Mortal, now and for years to come. It’s totally in keeping with the body of Kris’ oeuvre.”

They emerged with a piece of work that Was suggests is “One of Kris’ finest albums.”

Kristofferson isn’t one to arm-wrestle with his own legacy, or to set his truths of today against the truths of his old-and-gone immortal self, but he’s pleased that a life that has been sustained by the product of his own imagination remains fruitful.

Above all, Kristofferson is happy to be happy, grateful to be grateful, and wholly unwilling to take the credit for the wondrous way it’s all worked out. In the end, Feeling Mortal is a melodic note of gratitude, from creator to Creator.
“Gold Almighty, here I am,” he sings. “Am I where I ought to be? I’ve begun to soon descend, like the sun into the sea/ And I thank my lucky stars, from here to eternity/ For the artist that You are/ And the man you made of me.”