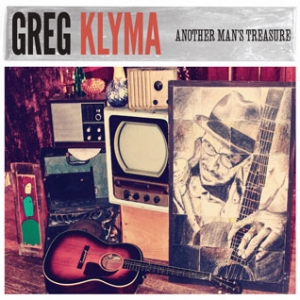 Fifteen years into a career that has yielded seven albums, dozens of national tours, and the acclaim of folk's most prestigious reviewers, Greg Klyma's eager fans paid for his new album. Completing the online fundraising well ahead of schedule, Klyma delivers an emotionally charged blend of fan favorites from recent tours, and never-before-heard material on his eighth album, Another Man's Treasure. Long known as a passionate and largely positive populist, Klyma's new album showcases an impressively matured song-writing talent. Traveling the perilous landscape of love,
Another Man's Treasure admits sadness, anger, regret and profound tenderness. Going beyond the Woody Guthrie/Mark Twain sass of recent years, Klyma shows himself navigating intimacy as a thoroughly modern man. But this blue-collar boy knows when to swallow the heartbreak, and so the album rallies with an equal measure of punky sing-alongs and bootstrap lifters.
Solo songs feature Klyma's adroit guitar and banjo picking, while the band numbers rollick with great energy and a chorus of harmony singing, thus welcoming the listener to Klyma's universe: long drives alone full of solitary contemplation, landing somewhere in America to shake the rafters and remind everyone of the love and dedication that keeps us going.