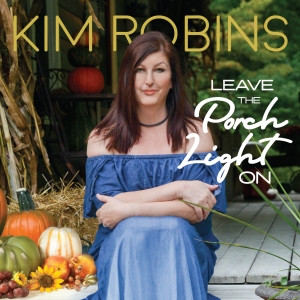 The wait is finally over, as Kim Robins releases her long awaited album Leave The Porch Light On. The project includes 13 new recordings, all centered around the Indiana native’s one-of-a-kind voice. The collection also consists of a musician lineup of guests including Clay Hess, Tim Crouch, Kyle Estep, Josh Woods, Duane Estep and Brennan Hess (full track listing below).

“I have so many emotions ahead of this CD release. The last couple of years have been rough on us all,” says Kim Robins. “I’m thrilled, relieved and sad at the same time. It will be the first project my parents and brother didn’t get to hear. I hope and pray you all will enjoy it as much as I enjoyed making it. Thank you to Clay Hess and Pinecastle Records for giving me the opportunity to live my dream!”

The latest single “Bourbon and Beer” (released in the fall of 2022) tells a haunting story about a husband who can’t crack his addiction, which ultimately leads to more issues down the line. The lyrics were perfectly captured by co-writers Kim Robins, David Morris and Dawn Kenney. It was met with high critical-acclaim when Roots Music Report gave the project a five-star review, while noting that “Bourbon and Beer” was one of the standouts. Bluegrass Today complimented the collection by adding, “Suffice it to say Leave the Porch Light On is a sturdy yet sincere offering that brings Robins’ incisive presence solidly to the fore. That makes this album an illuminating effort indeed.”

Recorded during the COVID era, Leave The Porch Light On features a collection of 13 recordings. It’s very obvious when listening through the record, listeners can hear various influences that stay true to the Hoosier’s unique sound. There’s also no shortage of hit songwriters on the collection, including tracks penned by Paula Breedlove, Mark Brinkman, Rick Lang, Alan Johnston, and more.