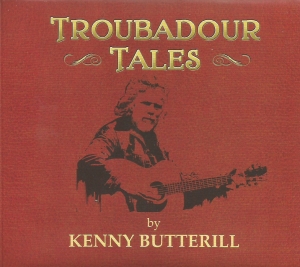 Scroll down for detailed info on songs and credits

Bio
Kenny Butterill is back with his upcoming new release “TROUBADOUR TALES”. Early indications are the long anticipated CD has a sound and feel that is true to Butterill’s legacy of delivering “rootsy, folksy, bluesy, Americana, alt.country, feel good music”. His influences include J.J. Cale, John Prine and Gordon Lightfoot. Butterill’s music has garnered airplay on hundreds of radio stations and has endeared him to markets all over the world.

TROUBADOUR TALES, a project ten years in the making, is the third CD from Butterill and it has over 20 world class artists performing on it including Donovan, Audrey Auld, Zoe Muth,Cindy Cashdollar, the late Sarah Elizabeth Campbell, John Lee Sanders, Ray Bonneville, Redd Volkaert, Rob Ikes, David Grier, John Reishman, Washboard Hank and Linda McRae amongst others. The songs selected for the new CD emerged from the songwriting immersion Butterill has been in for the past ten years. Recently dubbed “the romantic poet of Americana music ” by Dallas Dobro the dean of Americana DJs, Butterill writes close to the heart and this is reflected in the new offering.

Mixed by: Joe Weed and Kenny Butterill
(except where noted)