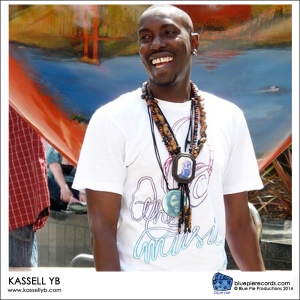 Kassell Youssouph Bodiang, aka Kassell YB, was born and raised in Senegal, West Africa where he developed a passion and appreciation for music at an early age. He used this interest in music to focus his energy in an environment that presented many obstacles and challenges.

Growing up in a large family and community, Kassell YB realised it would become important for him exercise his individuality through his compositions, often seeking out a quiet place to express his creativity.

During his earlier years Kassell YB always believed that there was more to life than what was around him. Over the years he scoured his home country in search of a greater life experience and to gain a deeper explanation for existence.

From a young age, drums provided a solid foundation for his musical career. While in Africa, he used this gift to start his own drumming business and people came from around the world to learn under his instruction. Kassell YB continued to teach while he travelled throughout Europe. As Kassell says: "I have travelled many miles, place to place, just me and my drum".

Kassell YB’s musical influences came from a variety of genres with artists such as Sting, The Police, Tracy Chapman, 2 Pac, Phil Collins, Bob Marley, Snoop Doggy Dogg, and his all time favourite Michael Jackson. As a result, his own sound developed as a fusion of these influences creating his own unique style. Being multilingual, he has now begun to incorporate his own voice into his compositions while he sings in English, French and his own native language of Wolof.

In 2013, Kassell YB was ready to record some of his works. He travelled to the US where he was able to produce a sample recording CD which showcased his developing talent and obvious creativity and musicality. While there, Kassell YB spent a lot of his time working with the children in the community and continued to share his gift as a West African drum and dance teacher.

While in the United States, Kassell YB spent a lot of his time living on the streets where he was required to adapt and become self-sufficient. However, it wasn’t until after the birth of his first child that he refocused his energy towards his developing musical career and began composing full time. His debut album “Dreams come true” is out now on Blue Pie Records.

Kassell YB is now living in Northern California where he is working on two brand new albums, one of which is to be released internationally to Africa, Europe and the USA. Kassell YB is a Blue Pie Records artist.