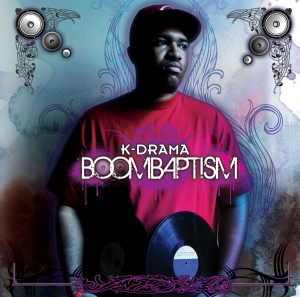 They say "Hip Hop is Dead?" k-Drama's 5th release, BoomBaptism, is a direct retort to this question successively circulating today. BoomBaptism, according to k-Drama is, "the rebirth of creativity in Rap music." He believes it's not too late for rap music to be resuscitated and submitted to the Lord. This album inspires listeners to have confidence in the gift God has given them. "I'm encouraging listeners to seek God, not the world, for ideas to apply to their ministries," explains k-Drama, "God is limitless!"

k-Drama, born Anthony Regis Jones, has been immersed in ministry since 1998, starting at 14 years old. He's independently pushed 3 albums and his fourth, "Behind the Glory," was released by Holy Hip Hop/EMI Gospel September 2006. The past two years have been a whirlwind of engagement and opportunity for this young man. He has added, to his list of accomplishments, production credits in the likes of Flame, Lecrae, and R-Swift's album booklets; musical collaborations with ministerial moguls Canton Jones, DJ Morphiziz, and on compilations by Syntax Records and Holy Hip Hop. k-Drama has performed in events, Fla.vor Fest (Tampa, FL), Rapfest (New York), GMA week(Nashville, TN) and the Holy Hip Hop Awards (Atlanta, GA) where he was a 2008 honoree.

The highly anticipated, BoomBaptism, is expected to rent the stigma of gospel rap and bring a fresh perspective and quality to yearning ears. "Air Jordan," the first single of BB, has created a tidle wave of publicity. The message is simple, every believer has the ability through Christ Jesus to "Air Jordon," over the enemy(defense)! He has guest appearances from D-Maub, Dre Murray and R-Swift, to name a few; and production credits ranging from Tony Stone and Theory Hazit to Cephas and tracks done by k-Drama himself. This album invites your senses on a journey as we, "Act Out the King," shows us how to flee our earthly desires in, "Flying Away," and takes us through moments of reflection and worship in, "Hindsight." It's a must-have component to your musical collection, an accent for the ages.

Outside of music, k-Drama is heavily involved in his Cincinnati neighborhood, teaming up with churches to reach inner city youth. He's married to Charde', who is also featured on BoomBaptism. They have a 2 year old daughter Naima, a vivacious little girl with a lot to say! She holds a deep love for her daddy and his music, she's his biggest little fan. k-Drama's also involved in an initiative in his city, CeaseFire Cincinnati, to reduce gun violence.

To book K-Drama, inquire at booking@k-dramamusic.com
2
What's This
Advertisement