Joyce Shaffer - "Product Of The USA" by WHP 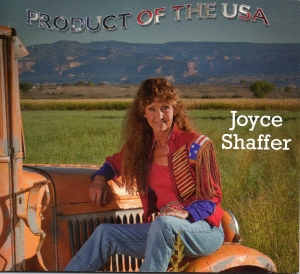 Los Angeles, CA -- Singer songwriter Joyce Shaffer has a new CD out starting on Oct 24th titled, “PRODUCT OF THE U.S.A.” and has dedicated it to the American people from all walks of life.

“We need more songs that people can get behind and have a sense of pride at being Americans again,” Shaffer said. “ For too long we have slowly been going down the wrong path and it is my hope these songs will help this country that I love so much.”

Joyce Shaffer has had great success with her songs, “Takin’ Back Our Country,” “Hey, Calderon!,” “American Soldier” and several more. Her singing and song writing is reminiscent of Loretta Lynn and Kitty Wells and has people talking. Her title song, "Product of the U.S.A." shows her country roots and ability to tell a story through song with the best of them.

Shaffer has been criss-crossing America singing her songs and is a regular on the country charts. She has found her home in country music and her fans welcome her.

Joyce is available for interviews and appearances by going to the above contact address and phone number or you may reach her public relations office at: www.JoyceUSA.net


Colorado, 7/16/10 Singer songwriter, Joyce Shaffer has done it again. Another in a growing list of her politically charged country songs has been released. "Hey, Calderon!" is a fire across the bow of Mexican President Felipe Calderon's address to Congress on America's treatment of Mexican illegal aliens here in the United States.


Joyce Shaffer, who has been called the Loretta Lynn of political and patriotic songs as well as, "Pure Country" and one of her favorites names, "The Patriot" has made a name for herself across America singing songs from the heart about America and its current political turmoil. "Hey, Calderon!" speaks to America's need to secure our borders and supports Arizona's new law.

After the success of her last song, "Takin' Back Our Country" She found America was hungry for more songs that they could get behind. Joyce is currently working on additional songs to add to her arsenal and will release a song soon that singles out President Obama called, "If You Dare."

Joyce Shaffer is available for live performances across the United States and can be contacted at her Public Relations office. You can reach Joyce at:

I am Joyce Shaffer and live in western Colorado near the Utah border with my husband and granddaughter. We raise running quarter horses on our 41 acre ranch.

I was born in Cortez, CO. and raised for the first 11 years of my life in Cahone, CO. I have many friends and relatives still in that area. My father was a sharecropper farmer and we were raised poor. I'm the baby of 9 children born to my parents. I moved to Nucla, CO. after my father's death and my mother, who was a saint, finished raising me. I married early and raised two children. My only daughter, Kim, was killed in a car wreck in 1991 and I dealt with that "bad year" for 14 years. Time heals. My only son,Jeff, served with the U.S. Marines in Desert Storm and thank God, came home to us in one piece. My husband is also and ex-Marine. Our family has 7 Marines or ex-Marines and one Air Force grandson. We love this Country and defend it.

The Lord called me to step out and sing the songs He gives me for America, in July 2009. The songs come intact with lyrics and melody at the same time. I polish on them, re-arrange some words and sing them. The Lord gives me the song before the situation it serves occurs. I do not read music, nor write songs on my own. I wear the colors of the flag when I sing His music and my boots are red. The red boots are for the blood of those who gave their lives for us to be free and securing the fact we won't walk in their shoes, because of their sacrifice. I am a Patriot, freedom breathing American. I will continue to sing His message to America until the torch is passed to someone else.

The time for America to regain it's values and liberty is NOW! That is my purpose. I AM AN AMERICAN!


A word about my friend Joyce Shaffer:

Joyce Shaffer grew up in the America of the 1950's when patriotism and common sense was abundant and the American flag was proudly honored at all functions. Joyce knew as a child the special place America held in the world and it shows in her music today. Her deep faith in God and abiding love of country inspire her songwriting and give her the strength to keep her message going strong. Joyce may have grown up poor, but she found riches in the beauty of the rugged Colorado landscape which has been her home. Finding a rewarding life on their ranch, Joyce and her husband, Danny, raise paint and running quarter horses. Joyce has a background in music with a band she sang with in the 1980's called Country Comfort, but she never thought she would someday be writing and performing her own songs. Not until it became clear to her that America was heading down the wrong path and that our freedoms were for the first time in her life changing for the worse, did inspiration give her the words to write and sing. Inspired by God, Joyce writes the words given to her. Her music now has made its way across our country and is loved by those who remember the strong, self-reliant America before someone wanted to change it. Dedicated to help right the wrong visited upon America, Joyce is untiring in her effort to spread the message through her music. She is an American Patriot and I am proud to call her my friend.