Josh Garrett - Honey For My Queen 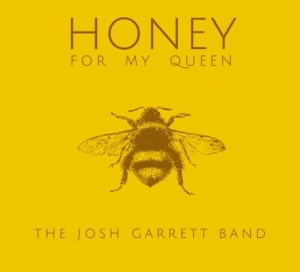 Josh Garrett is a songwriter, singer and guitar player from New Roads, LA. He and his family relocated to Houma, LA when Josh was a child. Josh picked up his father’s guitar when he was 12 years old and started writing songs soon after. By age 20, Garrett was performing several times a week in Houma, LA. At age 24, he recorded his first album entitled, “Changed Man” and never looked back. Josh and his band started to travel regionally to promote his new album. In 2008, he relocated to Nashville, TN. While there, he recorded his second album, “Live on Printer’s Alley” - a double album released Nov 2009. In 2010, Josh returned home to Louisiana, and began work on his third album. "String of Problems”, released Aug 2011, hit #1 on the Roots Music Louisiana Blues Charts, and hit the #1 Spot two weeks in a row on American Blues Scene “Blues Top Five”. While continuing to tour and promote his unique brand of Louisiana roots and soul, Garrett recorded his latest album “Honey For My Queen”. Josh still resides in his home state of Louisiana near Baton Rouge.
_________________________________________________

Josh Garrett will tell you that his newest release Honey for My Queen "is about leaving,...no..., it's about coming home." In reality it's a little bit of both. The album has a live feel that takes you on a musical journey through some of Josh's greatest loves: his guitar, touring the country, his home state of Louisiana, and his family. In typical Josh Garrett fashion, the groove is what captures you right from the start as you travel with him to find the balance between his love of the road and his love of home.

From the track "Memphis," where Josh sets a lazy rhythm and sings of an unwelcome evacuation from Houma, LA during Hurricane Gustav, to the raw track "Goodnight, Goodnight," which features only resonator slide guitar and harmonica, the album expresses the emotion of leaving home as Josh has done for over a decade touring the country with his band.

On the track "Same Boat," Josh is joined by legendary artist, Mr. James Johnson. Johnson is a Baton Rouge blues-man who played bass and later guitar with Slim Harpo (James Moore). He is best known for playing the lead on Harpo's big hit "Baby Scratch My Back." After Harpo's death in 1970, Johnson virtually stopped playing, but in the early 90's he returned to music, playing bass with Raful Neal. The album also features other native Louisiana musicians, Corey Duplechin, bassist for Tab Benoit, and fiddler Waylon Thibodeaux.

Honey for My Queen shows Josh Garrett's passion for all the loves in his life, but most of all it shows his passion for laying down a groove with his guitar to deliver a sound that is not only heard but deeply felt.
24
What's This
Advertisement