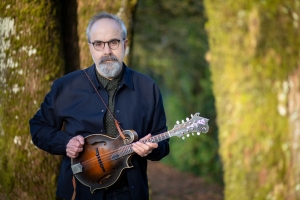 Grammy Award-winning musician John Reischman has been a foundational mandolinist, composer, bandleader, and musical educator in bluegrass and North American roots and folk music since emerging from the vibrant “new acoustic” music scene of the Bay Area in the 1980s. A founding member of the groundbreaking Tony Rice Unit, Reischman’s mastery of bluegrass, old-time, swing, and multiple Latin American musical styles, coupled with an Old Master’s sense of tone, taste and musicality, has brought him a global reputation as one of the finest mandolinists of his era.

Previously, Reischman has released a series of acclaimed solo recordings, North of the Border, Up In The Woods, and Walk Along John, that showcase his gifts as a composer and instrumentalist. Many of John’s melodic mandolin tunes such as "Salt Spring,” “Little Pine Siskin,” and “Birdland Breakdown,” also have been adopted by the bluegrass community as standards and can be heard at jam sessions across the continent until the wee hours of the night.

In addition to his solo career, as leader of John Reischman and the Jaybirds, John and his talented U.S. and Canadian bandmates - Nick Hornbuckle, Trisha Gagnon, Patrick Sauber and Greg Spatz - have toured extensively throughout North America and abroad for two decades, bringing a uniquely Pacific Northwest sound to their brand of bluegrass and melodic fiddle tunes. They’ve earned two coveted Juno Award nominations for the best performances in the Canadian organisation’s “Roots and Traditional” category, and have released seven albums during their 20-year tenure.

Considered by critics and audiences as one of the true masters of mandolin today, John Reischman remains committed to his original vision of exploring multiple mandolin genres in a style based on making each note and phrase sound uniquely rich and clear. One of those rare instrumental musicians who, like his mentor Tony Rice, can be recognized immediately within his first few notes, John’s playing on his legendary 1924 Lloyd Loar-signed Gibson F-5 mandolin epitomizes tone and taste.

A true musician’s musician who serves the melody over instrumental flash and hot licks, John Reischman continues to explore the melodic possibilities of mandolin in fresh ways in the 21st Century, reaching new generations of fans with his impeccable musical taste and style.
26
What's This
Advertisement