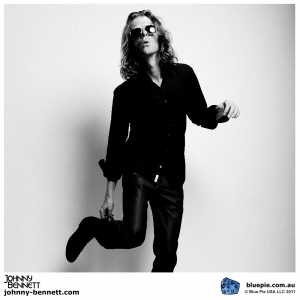 Johnny Bennett is one of those rare, but highly sought after artists – the breed of singer/songwriter who has lifetime experience and wisdom that literally gushes into the meaning and sentiment of every song he writes. Having previously held residency in San Francisco, New York and currently Los Angeles, Johnny Bennett is well equipped to draw on varied walks of life, adding a precious depth and quality to his work.

Johnny Bennett, born John R. Hollingsworth on September 25, 1976, was raised in Muncie, Indiana also known as Middletown USA. Johnny has been blessed with two mothers in his life. His Momma is an editor, teacher, songwriter, and dancer. Momma Beth is a nurse, and small business owner amongst other endeavors. Johnny’s father is a physician who is always building something. Johnny is the ‘middle kid’ with an older brother who works in graphic design and a younger sister who is an environmental writer and poet. There was a strong sense of artistry growing up in this family and he had numerous advantages and opportunities that allowed him to follow his calling.

From a young age Johnny knew that he could sing and had a voice. It took an exit from his classical background and several years of slowly teaching himself to play the guitar for that voice to have a platform. Bennett’s move to California from Vermont after his first year of college was the catalyst that set him on his path. During his first year in California, Johnny began what was a long series of forming and dissolving bands, living in San Francisco and touring up and down the West Coast. These were really Bennett’s first tastes of failure in music. It was 7 years of spinning wheels, learning, an endless series of moves back and forth cross-country, stints in Pennsylvania, New York and Indiana and then back to California time and time again. “I just couldn’t sit still to save my life in my 20’s, it was all just a constant blur with very little achieved”.

It was the move to Los Angeles in 2000 that changed Bennett’s direction in music for good and defined his current point of view. Most of Johnny’s skill and raw approach to songwriting came from working as a street performer in Los Angeles. These years of ‘working it out’ lead to opportunities to work and learn from some amazing songwriters and producers including Chris Julian, Jeff O’Rourke, Peter Foldy, Ali Nikou and Sean Dever. These individuals were a major element in informing Bennett’s songwriting along with the endless set of artists and music in many genres that Johnny is influenced by.
The Violet Hush, which was co-written with Ali Nikou and Suanne Gray and produced by the highly sought after, Duane Lundy, is a 10-piece picture book in melodic form – each track paints a lyrical snap shot of varied life experiences in LA. From aggressive gripping rock tracks such as, World on Fire, through to the mellow drift-away tones of, Sailboat, this album delivers indulgent diversity by the bucket load.

In late 2009, Johnny, Duane and a very talented set of musicians made the trip to London, England to record the follow-up to The Violet Hush titled Gone Missing. Recording in England was this dreamlike experience for Bennett and has delivered his second in his series of timeless classic rock influenced releases. For the last year Johnny has been pushing for Gone Missing’s release. This is a dark album with elements of indie rock, soul, and sparsely produced numbers that suit Bennett’s voice and style. “I’m so proud of this album, I worked tirelessly to get it cut and there are moments on this project that I never thought possible in my life.”

In comes Blue Pie Records to save the day. Johnny has recently signed on with the Australian Label Blue Pie Records. This new relationship is finally allowing Johnny to take his music to the world marketplace. It took a long time to find and label that truly believes in what Johnny is trying to accomplish with his music and Blue Pie is a perfect fit to represent Johnny’s brand.

A raw, honest and talented performer delivering pockets of awesome music with every song he performs, Johnny Bennett has had the pleasure of opening for the likes of Pat Benatar, The Doobie Brothers, Spoon, Dr. John, Maceo Parker, Simple Minds and Lynyrd Skynyrd.

Johnny Bennett is part of the Blue Pie Family of Artists. For More Information on Blue Pie, please visit: www.bluepierecords.com