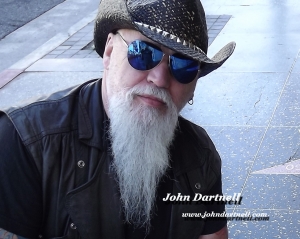 I am English born and bred and have played music most of my working life.

I had a brief spell away from music and in that time I did some acting work which included having a role in one of the Harry Potter movies, I was also in a pop video for a band called ‘Busted’ with a song called ‘Year 3000’, which made it to number one in the charts here in the UK plus I appeared in various TV shows over here..

What others say about me.

John or The Beard as he is affectionately known, is a singer/songwriter from London England. His American influenced music and his UK upbringing gives John his own unique style of music. His songs vary from his own style of country (Well what do you expect from a Brit) to haunting love songs , through to songs about life, through to good old Rock and Roll. To sum John up in a few sentences is difficult, the best way to describe him is unique…….. Listen to the man listen to his music.

John's song 'If It Ain't Country' was in the New Music Weekly indie chart for 15 weeks peaking at number 9.