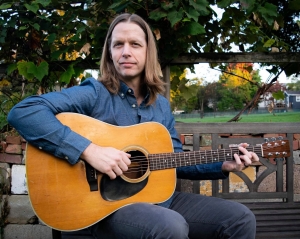 Jody Mosser is a multi-instrumentalist from Frostburg, MD. He performs with progressive bluegrass phenoms, The Plate Scrapers from Bluemont, VA and Pittsburgh, PA's Jakob's Ferry Stragglers. He also has occasional electric guitar driven outings with his own jazz/funk group, FloJo. He has performed all across the the United States from Seattle, WA to the Keys of Florida. After graduating from Frostburg State University and leaving a 5 year career in the hotel business, Jody has since shared the stage with music greats such as Del McCoury, The Travelin' McCourys, Joe Craven, Steve Kaufman, Johnny Staats, Peter Rowan, Jeff Austin, Drew Emmitt, Cris Jacobs, Andy Thorn, Larry Keel and Cabinet and won 1st place in the 2013 Watermelon Park Fest Guitar Flat-Picking Competition. Along with a rigorous teaching and performing schedule, Jody also works as a live sound and studio engineer and has produced albums for local and regional artists.

His upcoming solo release entitled, 'Hands Full,' will be out December 3rd.
13
What's This
Advertisement