Jim and Lynna Woolsey - Long Ago 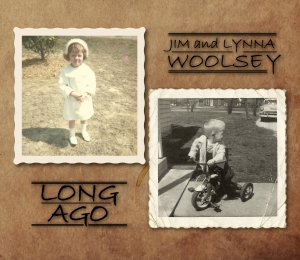 Performing together for nearly three decades, Jim and Lynna finally decided a few years back it was time to make a professional CD with professional musicians. They called Randy Kohrs and the rest is history. Randy not only produced and engineered, but also played resonator guitar & sang harmony on their first professional CD. Mike Sumner co-produced and played banjo. Clay Hess added great mandolin tracks, Mark Fain added an awesome upright bass track, and Tim Crouch outstanding fiddle tracks. "It's been a lifelong dream to produce an album of our original material", said Jim.

Now freshly signed to Bonfire Recording Company, they are back with a new passion to take the Bluegrass and Americana world by storm yet again with a collection of ten more tremendous songs, penned mostly once again by Jim and Lynna, and brought to life by them with their band, and several guests, including co-project engineer and producer and Clay Hess. Randy Kohrs also participated in the engineering on this project.

Born into a family of musicians, Jim began playing with a popular local band The Patoka Valley Boys when he was just fifteen years old. Soon after, he and Lynna met and married, she also started playing and singing in the same band. In 1979, a documentary was made about the band and is still posted on folkstream.net. Tough, Pretty or Smart which was produced for public television by Dick Cane and Dillon Buston.

As a single act or in a band, Jim has shared the stage with acts like The Nitty Gritty Dirt Band, Andy Williams, Marty Robbins, etc Both Jim and Lynna have won various bluegrass awards for Old Time Vocals, Guitar, Mandolin as well as many band titles. In 2002 and 2003, our band Fields of Home, won first place in the Indiana Picking and Fiddling Contest. Jim and Lynna have performed together at the Bluebird Café in Nashville and Goldie's Opera House in Owensboro. They also won the Kentucky Fried Chicken Talent Hunt, in 1989. Jim also appeared on You Can Be a Star and much more.

"Community is very important to us and we often give benefit performances. We also sing at churches in the tri-state, Indiana, Illinois and Kentucky. We love being able to lend a hand to the community that has supported us over the years and those in need of help," comments Lynna.

We are dedicated to getting our music heard and performing as much as possible, and are looking forward to performing for you!

We hope you enjoy "Long Ago" on Bonfire Records and the stories that it tells!