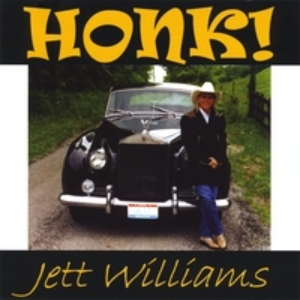 
Jett Williams, daughter of the legendary Hank Williams, was born in Montgomery, Alabama, five days after her father died on his way to Canton, Ohio, where he was to perform on New Year's Day, 1953. Relinquished by her natural mother, Bobbie Jett of Nashville, the infant was taken from the hospital where she was born into the home of Hank's mother, Lillian, who adopted her. Lillian, who started her lengthy adoption process within days of Hank's funeral, completed the adoption in December of 1954. Unfortunately, she was dead within two months and the Williams family no longer wanted the infant, whom Lillian had named Cathy Yvonne (for the "Yvonne" in "Jambalaya"). The Williams family made Jett a ward of the State of Alabama and she was relocated to a foster home in Pine Level, Alabama, at the age of three. Subsequently adopted again by a family in Mobile, Alabama, Jett was raised there and attended the University of Alabama.

During her youth, Jett had no idea who her natural parents were, let alone that her daddy was Hank Williams, but from a very young age she demonstrated an unusual and natural talent for music, singing, and her guitar. In the early 1980's, at the urging of her adoptive father and armed with a few facts and a little rumor, Jett set out to learn what she could about who she was and what had happened to her. After years of futile effort, fortune smiled and Jett got proof-positive that Hank Williams was her father. Not only was he her father, he had made all provisions for her and her well being. In fact, three months before Jett was born, Hank had prepared and executed a notarized pre-birth custody agreement giving him full custody of his as yet unborn daughter. The rest is history, and is documented in the files of the Alabama State Court and in the scores of newspaper and feature magazine articles written about Jett and her saga.

Jett Williams was declared by court order dated October 26, 1987, to be the biological daughter of Hank Williams. On June 5, 1989, the Supreme Court of the State of Alabama, reversing a lower court ruling, found that Jett, since birth, had been the victim of fraud and judicial error in that her identity was concealed from her for financial gain. The Supreme Court declared all prior orders in the Estate of Hank Williams to be null and void, since procured by fraud on the court, and reopened Hank's estate, making Jett Williams a legal heir, entitled to one-half the estate proceeds. Her autobiography, entitled "Ain't Nothin' as Sweet as My Baby," chronicles the saga of her struggle (Harcourt Brace Jovanovich, 1990).

Subsequent to the publication of her autobiography, the federal courts awarded Jett her proportionate share of her father's copyright renewal royalties. Since the story of Jett's existence first surfaced in 1985, she has been featured on the Today Show, Good Morning America, Inside Report, Inside Edition, Current Affair, Entertainment Tonight, Crook and Chase, Country Notes, Sonya Live, PM Magazine, and scores of other national and regional broadcasts. In most instances, such as Current Affair, Entertainment Tonight, and Sonya Live, to name but a few, Jett has been the subject of a major, and regularly repeated feature. Additionally, she has been the subject of feature articles in scores of publications, including People Magazine, The Washington Post Magazine, USA Today, Atlanta Constitution, New York Times, Southern Magazine, Dallas Times Herald, NY Daily News, Houston Chronicle, Chicago Tribune, AP Feature, Baltimore Sun, LA Daily News, Los Angeles Times, Providence Journal Bulletin, Birmingham Post Herald, South Bend Tribune, Ottawa Citizen, and Boston Herald.

Jett had a number of names and a number of homes in her early youth. In fact, every time she changed homes, someone changed her name. Somethings, however, were constant in Jett's first years, and all things were recorded by the various social workers charged with accounting for the activities of their most famous "ward." One "constant," according to the records, was Jett and her guitar. Starting with her first two years, spent with her grandmother -- Hank's mother -- Jett always had a guitar. And according to her peers in later years, she was always the hit of the party by singing and playing. Jett says she liked to sing until she made them cry. And she still does!

STARS SHINE BRIGHTLY AT THE R.O.P.E. BANQUET - October 8, 2009
Read what Marty Martel, President of R.O.P.E., writes about Jett's performance at the banquet...

So now all the awards have been given out and it is time for the entertainment to start, and Keith gives the introduction to one of the greatest names in country music for all time and the name is Williams and our featured artists for the 22nd Annual Banquet Awards Show is the daughter of Hank Williams, JETT WILLIAMS AND HER MEN OF STEEL. Jett came out and introduced the 4 steel guitarist who are all members of the Steel Guitar Hall of Fame. Russ Hicks, Ron Elliott, Lynn Owsley and Billy Robinson. Jett asked each one to play a song, and as each one played their choice, the other 3 steel guitarist filled in as an orchestra complimented by Jett’s band members. I cannot explain to you the electricity that went through the audience as for the next 20/30 minutes we were engulfed in the sweet sounds of the masters of the steel guitar and pure country music. After all 4 of these great steel guitar players had wowed the audience, Jett came front and center again to bring the music of her Dad to the packed house that had come especially to hear Hank’s daughter pay tribute to his music and also to Don Helms who worked with Hank Williams for so many years. Jett Williams proceeded to move the crowd with her rendition of her Dad’s greatest songs along with stories she has gathered over the years. To see her and watch her on stage is a very eerie feeling, because she has all of the mannerisms of her father and he would be so proud of her and how she has gained worldwide recognition of his music with her own delivery. I have known Jett for many years, but never have I seen her in such complete control of a show as I did last night. SHE WAS AWESOME AND SHE WAS AS GREAT OF A PERFORMER AS I HAVE SEEN IN MANY YEARS. She gave reason for the name of Williams to be the force that it was, it is, and it will always be, and Jett Williams gave what I considered one of the best performances I have seen in many years. As she ended her show the crowd erupted with a standing ovation. The crowd stayed and took pictures with Jett who stayed and greeted everyone and thanked them for coming to the show.