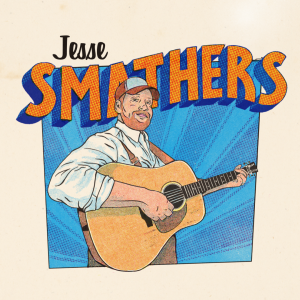 “One of the biggest joys in my life is playing music with friends,” says Jesse Smathers. “I have always had a goal to capture that joy and excitement that comes from a circle with five or six musicians.” Music has always been an important part of Smathers’ life - his grandfather, Harold Smathers, and granduncle Luke Smathers, received a North Carolina Heritage Award in 1993 for their contributions to North Carolina folk music.

Hailing from Eden, North Carolina, and now living in Floyd, Virginia, Jesse began playing the guitar at age 11. He picked up the mandolin at 15, and was heavily influenced by the music around him in his youth. In 2009, he won the guitar championship of the Virginia Folk Music Association. The following year, after graduation, he began his career as a touring musician with the James King Band.
​
Jesse joined Nothin’ Fancy in 2014. The same year, he was also inducted into Phi Mu Alpha, a music fraternity, as a Sinfonian - joining such greats as John Phillip Sousa, Count Bassie, Duke Ellington, and Andy Griffith. In 2015, Lonesome River Band welcomed him to the group as a vocalist and mandolin player, and in 2017, Jesse won the IBMA Momentum Award for Vocalist of the Year! After the departure of Brandon Rickman from the Lonesome River Band, Jesse switched over to guitar duties in 2021.
​
Through the struggle of the 2020 pandemic, Jesse found time to get his creative mind working. He began to work on the solo project he had dreamed of doing for many years. “This album is composed of like minded friends and musicians who I have been blessed to make music with over the years and musicians who have had a great impact on me,” Smathers shares. And, though he had a sound in mind that he wanted to capture, “the energy and what happened in the studio couldn’t have been planned,” he continues. “It was true magic.”

The latest single from Smathers’ self-titled debut album, “Under the Weather” was written by award-winning songwriter Mark “Brink” Brinkman. “Brink sent me a handful of songs, and ‘Under the Weather’ stood out immediately,” Smathers explains. “When I heard the lyric and melody, it was so reminiscent of the first generation bluegrass that I love so much.”

In addition to Smathers on guitar, octave mandolin, and vocals, the song features Jonathan Dillon on banjo, Gaven Largent on dobro, and Joe Hannabach on bass. Harmony vocals are provided by Patrick Robertson and Jessie Baker, and “Under the Weather” also features Jason Carter and Mike Hartgrove on twin fiddles. “The song truly draws inspiration from all the pioneers of bluegrass music,” declares Smathers.

In conclusion, Smathers addresses listeners: “I hope that you get the same joy listening to this project as we did playing and recording it.”

Jesse Smathers’ debut album releases on Friday, May 13th. CD copies of the album are available at jessesmathers.com, and the album is available on all major streaming platforms. The album is also available for radio downloads via AirPlay Direct. Jesse - along with an all-star cast of musicians - will celebrate the album release with a live performance at the Floyd Country Store in Floyd, VA on Sunday, May 15th.