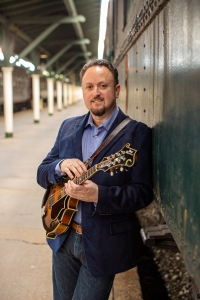 Winner of the 2009 & 2015 International Bluegrass Music Awards (IBMA) Mandolin Performer of the Year, Jesse Brock began his Bluegrass career with his family band at the age of nine. He actually started singing at age 7, taking fiddle lessons at 8 & picked up the mandolin at 9. His first album (1983) was recorded with his family at age 11 and later that year played the Grand Ole' Opry as the first place prize winnings at Bill Monroe's Bean Blossom Band Contest. As Bill's guest on the Early Bird Special, C.W. Brock & the Next of Kin, later to be renamed The C.W. Brock Family played two songs.

Fast forward to the present, where Jesse is regrouping after dissolving the latest version of his quest, Mainline Express. Now, he is currently forming a new band named Jesse Brock & Streamliner. Jesse is focused on getting into the studio @ Sound Biscuit Productions and starting on his next, much-anticipated band & solo projects. HIs last solo project was 2002 and made it to the finals @ IBMA [International Bluegrass Music Awards].

Jesse is currently performing with a cast of bluegrass veterans known as Fast Track on EMG Records. In addition to his current position, Jesse is also offering his Streamliner album band for bookings in 2021 and beyond. Jesse has been working diligently in the studio at Sound Biscuit Productions on his much-anticipated project, Streamliner. His last solo project was in 2002 and made it to the finals at IBMA [International Bluegrass Music Awards].

Jesse has been privileged to play all over the world, making his first trip to Europe in 1997, and returning several times since, including a trip to Bulgaria to record with Lilly Drumeva. Brock has since recorded in Spain as well.

Jesse has worked with: The Lynn Morris Band (2 albums), Dale Ann Bradley (2 albums), Michael Cleveland & Flamekeeper (4 albums), Audie Blaylock & Redline (2 albums) and most recently with The Gibson Bros. Jesse first appeared on the Grand Ole Opry at the young age of 11, and since has performed on stage with Ricky Skaggs, George Jones, Willie Nelson, Alison Krauss, The Tony Rice Unit, and the list goes on.  In recent years, Jesse was an integral part of Michael Cleveland & Flamekeeper, recording two band albums awarded IBMA's "Instrumental Album of the Year" (2009 & 2011), and the band winning "Instrumental Group of the Year"  four years in a row (2007-2010). Brock was also on Michael's 2 Rounder solo projects in the early-mid 2000's: 'Flamekeeper' & 'Let 'Er Go, Boys'.

In Nov. 2018, Jesse left The Gibson Brothers after a 5 1/2-year run. Jesse has signed with Sound Biscuit Productions & focusing on the next stage of his career, 'Jesse Brock & Streamliner'. Jesse is now living in Franklin, TN. (south of Nashville). This world-class mandolinist is also "for hire" to enhance your musical project, as well as offering vocals, guitar, and/or bass.

Streamliner is a definitive chess move to announce Jesse Brock as a producer of traditional yet fresh-sounding music. Though Jesse is known for his sideman contributions for over 39 years, professionally, he shows here that he offers much more. Fans who follow Brock’s career have patiently waited for his next outing as a soloist, singer and project producer. Brock has always played an integral part of every album he’s been a part. You’ll hear Jesse’s artistry throughout this exciting project with his familiar mandolin chops, solos and intertwining backdrop behind the vocals. As rare as it may be, you’ll also hear Jesse sharing his guitar and upright bass skills on a select few.

This also marks the first pairing of Jesse Brock & featured lead singer, Greg Blake. The two met several years ago when Blake was a co-owner of Jeff Scroggins & Colorado. Jesse Brock was blown away by the obvious power of Greg’s voice along with pulsing guitar rhythm & solos. Not long after, Jesse got a call from Jeff Scroggins, asking to join them on a European tour since regular mandolinist & son, Tristan Scroggins, could not participate. After the tour, Jesse learned that Tristan was following other offers away from his father’s band and a position had to be filled. Shortly after promoting the new line-up at the 2019 IBMA convention, Jeff decided to dissolve the long-running band for personal reasons.
Enter ‘Streamliner’ and the birth of a supergroup. Jesse has aligned himself with a juggernaut band consisting of:
Greg Blake on lead vocals/guitar,
Barry Reed on bass (Lonesome River Band)
Russ Carson on 5-string and clawhammer banjo – (Ricky Skaggs)
Jason Carter on fiddle (The Del McCoury Band & The Travelin’ McCoury’s)
Bronwyn Keith-Hynes on fiddle (author of twin parts) – (Mile Twelve)
Josh Swift on resophonic guitar on noted tracks (14-yr. tenure w/Doyle Lawson & Quicksilver & now The Isaacs)
Rob Ickes on resophonic guitar on noted tracks. – (Co-founder of Blue Highway and currently, their duo, Rob Ickes & Trey Hensley).

Almost by accident, a special voice was discovered in the kitchen of Sound Biscuit owner, Dave Maggard. His daughter, Emily, actually played an audio file of her life-long friend, Felicia Mikels. Whilst Greg & Jesse selected their parts, a third part had to round them out and Miss Felicia was that choice. In addition to the three parts, a fourth made its way for the depth of bass. While Jesse currently shares the stage with current bandmate of Fast Track, Dale Perry delivers one the world’s deepest bass vocals ever heard on two tracks.

Jesse has spent time on the circuit with all members of this album while keeping friendships alive. Barry & Russ were members of separate bands that Jesse was a part; Barry w/Michael Cleveland & Flamekeeper & Russ w/Audie Blaylock & Redline. Jason Carter was on Jesse’s ‘Kickin’ Grass’ album (2002). Jesse has watched Bronwyn Keith-Hynes flourish into the renowned artist she’s become with her band from the Boston area.

Now, with the release of this band album, I am sure you’ll be seeing and hearing this band throughout the near future. There is a resurgence of traditional Bluegrass music as it evolves around its origins. Though Jesse has teased us with doing another mandolin album, he saw a chance to blend with the times of putting together a stellar line-up for a band concept album. In closing, Jesse shares a moment by saying, “Amidst all the instrumental albums, I don’t share in the enthusiasm of shredding licks on one’s instrument only to dazzle the fans. I think by using my time wisely while involving a wide range of talent is a better use of my time at this point of my career. Some may consider me an anomaly amongst musicians who doesn’t build a repertoire of tunes, even though I have a few. Humbly-speaking, I like to think of myself somewhat as a proverbial mason, offering the mortar that holds a band together. That is my comfort zone in which I think I shine and excel.”
22
What's This
Advertisement