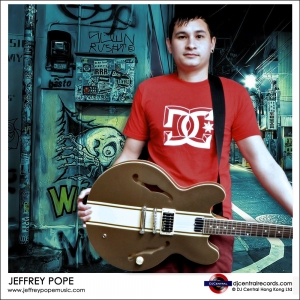 Straight out of Newcastle, NSW Jeffrey Pope has always had Australian music running through his veins.

Jeffrey’s father, a well-known figure in Newcastle’s pub scene, endowed Jeffrey with dreams of following his own musical path from a very early age.

While bursting onto the local scene as a drummer for a number of Newcastle bands, Jeffrey Pope was honing his first love as a singer/songwriter. Jeffrey’s time in the Australian Army including a stint in east Timor, saw his musical ability catching the attention of his fellow soldiers around the world. It was this period through which Jeffrey Pope realized that his own original work had the legs to find a commercial audience. With that behind him, Jeffrey Pope hit the pub circuit stage like his father, to find the response he was expecting and much more.

Lake View Avenue is Jeffrey Pope’s debut EP, released through Blue Pie Records. Hard at work in the studio, Jeffrey Pope has put together a record that he and his team are proud to present to the world. Produced by Linzi-O, Damien Reilly and featuring an incredible cast of session players including Sahra and Angelica Greening on backing vocals and harmonies. Working his heart and soul to the bone on his song writing, Jeffrey Pope has hit the streets of Sydney to further develop his talents, converting audiences to fans that would never hear him otherwise. His voice raw and his fingers blistered Jeffrey Pope plays for the all the broken hearts left to pieces.

The title track is the first to hit the radio waves! The rest of the tracks featured on the Lake View Avenue EP are a selection of infectious gems strewn through the blood sweat and tears of the pub rock stage and the busking circuit.

Jeffrey Pope is a Blue Pie artist, For more please check out his links below: