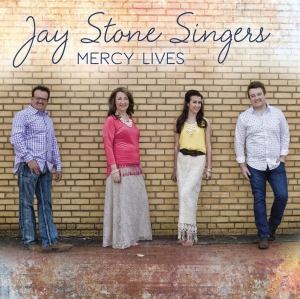 The ministry of the Jay Stone Singers began in the small North Carolina town of Hope Mills, in October of 1976. Jay Stone, the group’s founder, was serving as the choir director at his home church, Mount Carmel Pentecostal Holiness, in Fayetteville, NC. Having been involved with various local Southern Gospel groups for most of his adult life; Jay was beginning to feel that God was directing him to take his ministry back

on the road. However, this time would be different because the group was to be made up of Jay, his wife Mary, their 14-year-old son Jeff, their 11-year-old daughter Sharona, and a few close friends.

In June of 1984 Bobby Carter joined the group to sing tenor and play the bass guitar. Bobby and Sharona were married in November of 1987.

In January of 2010 Jay and Mary Stone decided it was time to retire from all of the traveling. They continue to be a vital part of this ministry, covering it with their prayers, and also managing the group business. On stage today you will find Bobby and Sharona Carter and their children, Stone Carter and Emma Carter.

This family group provides an exciting evangelistic ministry. Their desire is to witness to the lost, encourage the hurting and motivate others to grow the Kingdom of God. The close family harmonies are sure to please your ears, but the anointing and love of God will stir your soul. During the last 37 years of ministering through song, this family has traveled in approximately 25 states, Canada and Mexico. Over the years they have recorded several projects. The Jay Stone Singers currently record at Crossroads Music.

Bobby Carter grew up listening to Southern Gospel Music. He is especially fond of great Quartet singing. When he was 11 years old he began singing tenor with a popular local group called, The Young and United. He later played the bass guitar for, The Pioneers, a group that his dad sang with. Not long after High School, Bobby added his clear tenor vocals and solid bass playing to the Jay Stone Singers and the rest, as they say, is history. A few years ago Bobby felt God calling him to do more, he felt the need to study and learn more about God’s word and His character so that whether he is teaching or singing, he is always prepared to minister. Bobby served on staff, under the leadership of Pastor Wiley Hughes, at DNWOC/Mount Carmel Church as Pastoral Care Pastor until February of 2010. Bobby is passionate about serving God. He wants everyone to know the love and forgiveness that comes from a personal relationship with Him. He has been positioned and re-positioned and is ready for all that God wants to do in him and through him and the Jay Stone Singers.

Sharona Stone Carter is the daughter of Jay and Mary Stone and an original member of the Jay Stone Singers. After high school she attended UNC Pembroke, where she earned her B.S. Degree inMusic Education. Sharona teaches at a Private School in her hometown and also gives private instruction in piano and voice. She was on staff at her home church, DNWOC/Mount Carmel Church, until February of 2010. For many years she has rehearsed and directed Church Choirs of all ages, worked with Praise and Worship Teams, and directed Adult, Teen and Children’s musicals and dramas. Music ministry has been a central part of Sharona’s life since she was a very young girl. She has a powerful voice and a matching desire to hear and obey God’s voice.

Stone is the son of Bobby and Sharona Carter. Stone made his first appearance on stage when he was just a few months old. He has been traveling and ministering with his family all of his life. Stone has a beautiful smooth voice and an innate ability to connect with and convey to his audience the message in a song. However, as good as he is at singing, his first love is playing the drums. Stone got his first drum set when he was 18 months old. When he was just a toddler he would sit on his uncle’s knee and play, “I’ll Fly Away”, to the amazement of audiences everywhere. Today Stone is an accomplished drummer with skills that far exceed those of most drummers his age. In 2009 he won the IPHC National Talent Quest Drum Solo Division. In 2010 Stone participated in recording a Tribute CD to a friend and fellow musician. Stone loves the Lord and nothing makes him happier than sharing the love of Christ through the gifts that God has given him.

Emma Elizabeth Carter is the daughter of Bobby and Sharona Carter. Emma is a
delightful young lady with an equally delightful voice. She is light and clear on the high notes with a warm, rich tone on the low notes. Emma sang on her first recording when she was four years old. Emma is a gifted musician as well as singer. She began playing the violin in Kindergarten and since then has added the saxophone, flute, guitar, and piano to the list. Emma has won several Vocal Awards as well as awards for playing the saxophone, and guitar. She is very serious about her relationship with God and loves finding new ways to express the love of God through all of the Arts.