Jacob Underwood - As Time Goes By 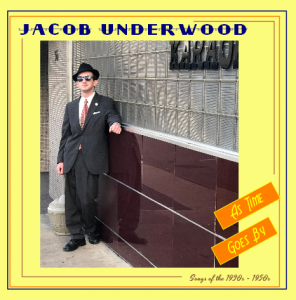 Jacob Underwood began singing on stage at age three and  took an early interest in the mandolin, after hearing his dad play.  He soon learned a few chords from his dad and
began to strum the mandolin, but then started taking piano lessons at age five.  When he was eight years old, he began playing the mandolin and fiddle, winning his first fiddle contest at age ten.  In 2007, at age 11, he becamea full time member of Bluegrass Express, joining his father and grandfather.  At age 13, Jacob finally picked up the banjo.  He is a multiple contest winner, including The Sandwich Fair Fiddle Contest (2006 & 2011) and Woodstock’s Havest Fest mandolin contest (2010).  More recently, he captured first place in the adult mandolin, fiddle, and banjo contests at Woodstock’s Harvest Fest in 2012,
then again taking the mandolin and banjo titles at Harvest Fest in 2014.  In 2012, Jacob released his first solo CD, “Grass Clippings,” on which he played all the instruments.  In 2013, he switched to banjo as his primary instrument, when National Guitar and Mandolin Champion Andy Hatfield joined Bluegrass Express.  The band’s 2014 release, “In Our Own Words,” featured all original material, and received airplay worldwide.  Jacob has served as a fiddle instructor at the Bean Blossom Youth Bluegrass Camp at Bill Monroe’s Bean Blossom Bluegrass Festival in Bean Blossom, IN.  Jacob’s 2015 album, The Banjo Files, has
just been released on Plum River Records.  The new project features several special guests, such as Matt Wallace, Steve Thomas, Sierra Hull, Ron Stewart, Greg Underwood,
Mike Scott,  Tim Crouch, Justin Moses, and Emily Hall.  Jacob’s newest album, As TimeGoes By, features bluegrass versions of 1930s-1950s pop and jazz hits and was released inAugust, 2020.