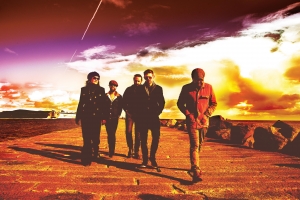 I Draw Slow is one of the most unique bands on the Americana scene. Fronted by brother/sister songwriting team Dave Holden (guitar/vocals) and Louise Holden (vocals), this Dublin, Ireland-based group sits squarely at the crossroads of Irish and Appalachian music and has received critical praise for an original sound that bridges the gap between traditional Irish and American roots music.

But as the pandemic closed in and touring came to a halt in 2020, the group was forced to put their burgeoning career on hold. It was a time of tremendous personal upheaval, with the loss of loved ones to COVID and subsequent months of grief for the Holdens. The dark days were made even more challenging by their isolation from each other and from their band mates Konrad Liddy (upright bass), Colin Derham (banjo), and Adrian Hart (fiddle). Without the panacea of music and the joy of creating and playing together to help them heal, they were left in their separate worlds to ride out the pandemic alone.

The trauma wrought by the pandemic is ultimately what defines I DRAW SLOW, the band’s new self-titled release. The process of writing and recording the album was completely unlike any of the band’s previous albums. They each wrote and rehearsed separately and, by the time they finally convened in a farmyard studio in the Dublin mountains to record, they found they had undergone a fundamental shift in their outlook on music and on life. Sonically, the traditional Irish and Appalachian influences that inform I Draw Slow’s prior releases were augmented by a much wider range of influences, including sixties pop, cinematic soundscapes and the funereal jazz of New Orleans. Lyrically, the new tracks pulled storytelling and tradition apart. As Louise says: “The new music represents tradition in the mixed up way that people live now, with the stories we tell to stop ourselves from going crazy and the false memories we build ourselves upon.”

I DRAW SLOW starts with the arresting opener “Bring out Your Dead”, a track that would not be out of place on Fleetwood Mac’s album TUSK (if the Mac played trad Irish music), with vocal echos of The Mamas & The Papas thrown in for good measure. The band then channels New Orleans trad jazz on the track “Trouble”, replete with rudimental snare and mournful brass. And on the duet “Queen of the Wasteland”, adorned by clawhammer banjo, fiddle and acoustic guitar lines, IDS draws upon Ireland’s long folk song and storytelling tradition to create a neo-folk classic that is both timely and timeless.

But it is perhaps the track “Dearly,” with its evocative lyric: “Sunburnt sienna, oxidised copper, the colours discovered by harm” that best describes the culmination of this project. Ultimately, this album captures a pivotal moment in a shared human tragedy and offers a stunning portrait of the beauty that I Draw Slow salvaged from their collective pain.

With the release of their new album, I Draw Slow further cements their reputation as one of the most interesting groups on the Americana/roots scene. Coaxing the past into the present, they have created a very personal sonic tapestry that has drawn fans on both sides of the pond and earned them slots on some of the most important festival stages across North America including MerleFest, Edmonton Folk Festival, Rocky Grass and Wintergrass. With the expansive musical platform of their newest release as a launching point, the possibilities for where I Draw Slow’s musical journey will take them next is limitless.
8
What's This
Advertisement