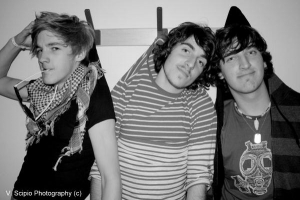 I AM BODHI - The name comes from Patrick Swayze's character in 'Point Break' but the meaning of BODHI comes from the budhist term for 'Enlightenment' it is in fact a level higher than Nirvana and has to do with the extinction of greed, hatred and delusion.

A bit of background info - Stos and Dimitri are brothers, they are half Greek/English born in Scotland, but they (and their parents) were brought up in central Africa, they went to boarding school in South Africa on the outskirts of the Kruger National Park. Stos is very sporty - captained his school Rugby team and swam internationally for Zambia - Dimitri also swam for Zambia but he is more interested in art and drama. They have always been musically talented and have performed together from an early age. They returned to the UK a few years ago completing their A'levels/GCSE's and are now both studying at City of bath College - (Music and Media/production)
Lucas was born and brought up in Devizes - Wiltshire, he was senior student at school and is also very sporty , his basketball team won the national schools basketball tournament last year. He is very fashion conscious, a vegetarian and the 'organised' one of the three.
Stos met Lucas in sixth form in 2006 they formed a band initially with another drummer and under a different name and were instantly making a name for themselves locally. when they finished school in 2008 the drummer left for Uni and Dimitri who was then 15 joined Stos and Lucas to form I AM BODHi - .
They are all 100% commited to the band, they work hard, practice regularly, play regular gigs and always put the band first.

There have been many memorable moments from spending a week in London in 2008 when they recorded their first ep at The Animal Farm, getting mobbed by girls at the Furnace and signing autographs on everything from boobs to shoes, an impromptu rendition of 'Angels' live on radio (swindon 105.5) with a bunch of random people dragged in to take part, turning up to play one of their first ever gigs and being the only none death metal band - Lucas in his cardigan amongst all the leather, chains, tatoos and piercings! all in all they are having a great time - loving every minute of it and enjoying a lot of successes.