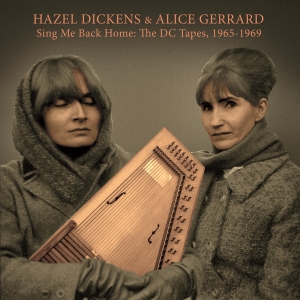 "In the universe that I live in, the discovery of these recordings by Hazel Dickens and Alice Gerrard in a dusty closet is something akin to finding some holy relic from the Bible days in some faraway desert. For listeners who like it pure and unfiltered, this collection—recorded in the 1960s at various kitchen tables with false starts, flubbed endings and all—is as intimate and essential as The Basement Tapes."
—M.C. Taylor (Hiss Golden Messenger)

Beloved bluegrass trailblazers Hazel Dickens & Alice Gerrard are revered as pioneers of the form, who challenged the norm at a time when bluegrass remained largely in the purview of men. Nowhere is this more clear than on a set of newly unearthed recordings, Sing Me Back Home: The DC Tapes, 1965-1969, out September 21 on Free Dirt Records. Sourced from Alice's private archive and digitized with help from the Southern Folklife Collection at UNC Chapel Hill, the recordings invite us to witness the creative process of these towering figures—just two voices and a handful of instruments working out arrangements at home. Across 19 tracks the duo sings the classic country of The Carter Family, The Louvin Brothers, and Jimmie Rodgers; contemporary hits of the 1960s penned by Dolly Parton and Merle Haggard; and barn-burning traditional standards that blur the line between old-time and early bluegrass. Sing Me Back Home is a raw, unfiltered listen to Hazel & Alice at the height of their collaborative energy.


Sing Me Back Home Tracklist

Musical trailblazers Hazel Dickens & Alice Gerrard are revered today as pioneering women in bluegrass, two artists whose musical partnership directly inspired future innovators like Naomi Judd, Emmylou Harris, Tim O’Brien and Hot Rize, and even Bob Dylan. But in Baltimore and Washington, DC in the 1960s, they were just two women with prodigious musical talent and a shared love for the old songs of the Appalachian countryside. Sharing their music at jam sessions, the two discovered a musical kinship that brought them both far from their original roots–Alice from her original home in Seattle and Hazel from her childhood roots in West Virginia. Moving beyond the conventional bluegrass instrumentation and repertoire, Hazel and Alice’s roving curiosity gobbled up songs from all corners of the US, from crusty country ballads to old stringband songs. They fused it all together into a sound that was wholly their own, as innovative as bluegrass had always been, and as raw and authentic as the mountain home the songs first came from. The pure joy that Hazel and Alice found playing together is perfectly captured on a set of newly unearthed recordings, Sing Me Back Home: The DC Tapes, 1965-1969, out September 21 on Free Dirt Records. The recordings are sourced from Alice’s private archive, and all but one of the songs have never before been commercially released by the duo. They invite us in to witness the creative process of these towering figures: just two voices and a handful of instruments working out arrangements at home and experimenting with new ideas. Across 19 tracks, the duo sings the classic country of The Carter Family, The Louvin Brothers, and Jimmie Rodgers; contemporary hits of the 1960s penned by Dolly Parton and Merle Haggard; and barn-burning traditional standards. Sing Me Back Home is a raw, unfiltered listen to Hazel & Alice at the height of their collaborative energy.

Hazel Dickens and Alice Gerrard first met at one of the many late-night musical parties in Baltimore and DC that brought together West Coast college kids looking to learn the music they’d first heard in Harry Smith’s Anthology of American Folk Music (Alice Gerrard) and Appalachians from the coal mining regions of states like West Virginia who had moved to the area looking for work (Hazel Dickens). Alice’s boyfriend at the time had told her, “There’s this little girl with a great big voice, and you gotta hear her,” Alice recalls. “It was a long time before I started singing with Hazel,” she says. “I was mostly listening. I felt like a real mentee as opposed to a full partner, and for a long time that was true. She was a huge influence on me. Then at some point somebody said, ‘Why don’t you sing something together? Then we started doing more and more of it.” Gathering in Alice’s kitchen, Hazel and Alice began sharing songs, working out new arrangements and pushing each other to try new things. Alice recorded these sessions on a reel-to-reel recorder, having perhaps some sense of their future importance, but mainly wanting to use them later to playback and listen for ways to improve their music. As Alice remembers, there was “lots of throat clearing, kids running in and out, page turning, mistakes, some out-of-tuneness, both vocal and instrumental (we never used tuners back then)... We stopped, we began again—we were practicing amid some chaos most of the time. At that point I was a single mom with four children, and Hazel was working a full time job in a retail shop.” Even with the household chaos, the musical genius of these two pioneering women is on full display. From the edgy backbeat of the autoharp on the Everly Brothers' “Bye Bye Love” to the punchy back-and-forth dialogue on “Cannonball Blues,” and from the heart-rending sadness of “No One to Welcome Me Home” to the rough-and-tumble banjo picking of “Let Me Fall”, these tapes show a visceral power, a power that carried them both through a lifetime of music.

Hazel Dickens passed away in 2011, but Alice Gerrard, now in her 80s, is still going strong and inspiring a whole new generation of musicians like M.C. Taylor of Hiss Golden Messenger. According to Taylor, who produced Alice’s 2014 album which garnered her first-ever Grammy nomination, “for listeners who like it pure and unfiltered, this collection is as intimate and essential as The Basement Tapes.” Sing Me Back Home: The DC Tapes, 1965-1969 may be humble home recordings, but the music shines through likes a rough gem, refreshingly free of pretension once all the artifice of the music industry is stripped away. As Alice herself says, “this is Hazel & I unplugged, un-produced, unaccompanied (except by ourselves), warts and all, wailing our hearts out.”
19
What's This
Advertisement