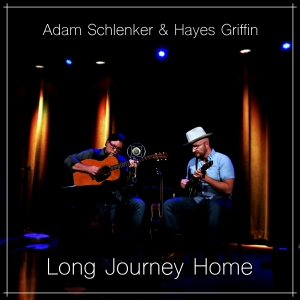 On rare occasions, musicians find themselves in a pairing greater than the sum of its parts, and this is certainly true for Adam Schlenker and Hayes Griffin. Geography kept the duo from working together regularly for several years, but 2021 carried Griffin back to central Ohio, bringing this duo back to life.

They began retracing their roots and the sounds of early country music, becoming re-infatuated with the sounds of The Monroe Brothers and “brother duets” of the 1930’s. Long Journey Home celebrates this iconic sound, pairing the duo's baritone/tenor vocals with acrobatic guitar and mandolin playing.

This album was recorded live in the studio just like the original 30's duets, so what you hear is what was captured in the moment.

The duo sets the tone of the album from the very firs second, launching into a blistering, virtuosic display on "Long Journey Home." Other focus tracks include the instrumental number "Salt Creek," and the high lonesome Monroe standard, "You Won't Be Satisifed That Way."

Adam Schlenker is an educator, performer, composer and arranger of American Roots Acoustic Music from southern West Virginia and is currently based near Columbus Ohio. Along with performing, recording and touring, he founded 5th Fret Productions in 2009 combining online, video based lessons with one on one instruction. Thanks to the Skype technology, Adam's private student base stretches across the US, throughout Europe and Australia. Allowing him to work with anyone in the world who’s wishing to develop their flat pick guitar and mandolin skills. Adam has been featured in Flat Picking Guitar Magazine and is also an instructor at several acoustic guitar camps including the Nashville Flat Pick Camps and the Stenback International Acoustic Guitar Camp in Denmark.

​Early in 2018, Adam took on the role of Coordinator of Bluegrass Studies at Denison University where he teaches ensembles, private lessons and History of Bluegrass and American Roots Music courses. This is an exciting opportunity to grow a very unique program that introduces Bluegrass and American Roots music to a new generation.
Here is an article about some of the work we have been doing https://www.denison.edu/academics/music/feature/136691

Hayes Griffin is a multi-instrumentalist and music educator living in Columbus, OH. Hayes holds degrees in music from Denison University (2010) and New England Conservatory of Music (2012), where he studied under the direction of legendary mandolin pedagogue John McGann.

After graduating from NEC, Hayes spent over ten years on the road touring with Canadian fiddler April Verch, then progressive bluegrass band Newtown, whose album Harlan Road featured Griffin’s guitar work and debuted at #8 on the Billboard Bluegrass Charts. During this time, Hayes taught hundreds of guitarists and mandolin players at camps and workshops across the United States, Canada, and Europe.

Additionally, Hayes made his mark in 2020 as one of the preeminent scholars of swing mandolinist Tiny Moore with the release of his Tiny Moore Tuesday series on YouTube. The same year, Hayes partnered with Swedish mandolinist/educator Magnus Zetterlund to become the second instructor on MandolinSecrets.com, where he serves an audience of thousands of musicians, exploring topics ranging from swing mandolin, bluegrass guitar, ear training, and mindfulness practices.

Hayes is a proud member of the GHS Strings Artist Family.