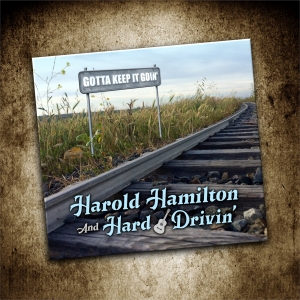 Harold Hamilton got his start at very early age in Bluegrass music. From hearing it as small child growing up by his Dad Glenn, and Uncles Ed, Andy & Pearl Hamilton, who all hail from Floyd County in Southeastern Kentucky. Not long after graduation he began playing bass with Andy Hamilton & East Kentucky Grass in Ohio. He would record several albums while also traveling with Andy over a 10-year span. He got to travel to the IBMA Awards show in 1998 when Uncle Ed Hamilton won “Song of the Year” for his song “Lonesome Old Home”. Keeping the family tradition of playing and singing bluegrass music was important, & as his oldest son Glenn began to take interest in the music, Harold set out to form his own band, Harold Hamilton & Hard Drivin’. The band is mainly consisted of Harold on Vocals & Guitar, son Glenn Hamilton on Banjo, & Glenn’s wife Ashley playing bass and singing harmony. After many years of playing and rehearsing, they decided to hit the studio to record their debut album “Gotta Keep It Goin’. A nod to his uncles who always told him to keep the music going. The result was an album of bluegrass & country music favorites done in a fresh bluegrass/country twist. 3 original songs written by Ed Hamilton & Andy Hamilton are on there to round out the album as well. The album features Curtis Oyler on Mandolin and Adam Haynes of The Grascals provides the fiddle work.

For more information please visit the band Facebook page by searching Harold Hamilton & Hard Drivin’, or by email at banjerman83@gmail.com

Tracks:
Lonesome Fugitive
Fit To Be Tied Down
I Need You Lord
Regena
Big Spike Hammer
Where Did I Go Wrong (Where Did He Go Right)
Say Won't You Be Mine
I See The Want To Your Eyes
Pardon Me If I Still Love You
Lonesome Road Blues
I Can't Go On Loving You
Memories Of Back Home

Two songs written by 1998 IBMA Song of the Year "Lonesome Old Home" songwriter Ed Hamilton, along with bluegrass versions of country hits, featuring Merle Haggard's "Lonesome Fugitive", Steve Wariner's hit "Where Did I go Wrong", and Conway Twitty's "Fit To Be Tied Down" & "I See The Want To In Your Eyes". Soaring family harmony & Toe-tapping instrumentation, featuring the Fiddle work of Adam Haynes of The Grascals!