The Grascals "When I Get My Pay" 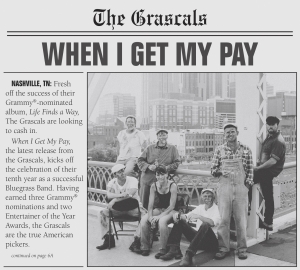 Great musicians will always find a way to make good music, but for great musicians to make great music, they must form a bond – one that, more often than not, goes beyond the purely musical to the personal. For The Grascals, that bond has been forged at the intersection of personal friendships, shared professional resumes and an appreciation for the innovative mingling of bluegrass and country music that has been a hallmark of the Nashville scene for more than forty years. As their releases prove, The Grascals’ rare musical empathy gives them an unerring ear for just the right touch to illuminate each offering’s deepest spirit – whether they’re digging into one of their original songs or reworking a bluegrass classic or pop standard.

Vocally, the trio of Terry Eldredge, Jamie Johnson and Terry Smith are tighter than ever, cutting loose on driving solo vocals and soaring trios with equal fire and passion. As an instrumental unit, The Grascals have never sounded sharper, with mandolin ace Danny Roberts, fiddler Jeremy Abshire and banjo player Kristin Scott Benson leading the charge. As a result, their cutting-edge modern bluegrass is delivered with a deep knowledge of, and admiration for, the work of the music’s founding fathers. Timely yet timeless, The Grascals make music that is entirely relevant to the here and now, yet immersed in traditional values of soul and musicianship. It’s a unique sound that has earned Grammy® nominations for three of their releases (THE GRASCALS, 2005; LONG LIST OF HEARTACHES, 2006; LIFE FINDS A WAY, 2013) for Best Bluegrass Album.