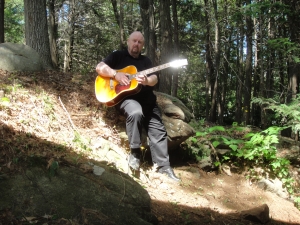 A Super blend of rock and soul, characterize the sound from this Boston based band Ya. Born and raised in Massachusetts, former teacher, and singer songwriter, George Thomas fills his songs with passion and vivid detail. Thomas’s music is personal, political, and universally appealing. Thomas's thought-provoking lyrics, and dynamic mix of acoustic and electric guitars, symphonic percussion and background singers carries a feeling to all his listeners. His work has been stated as a mix of the Moody Blues and Roy Orbison. Ya and George Thomas are totally original.

George Nevada Thomas has one of the most powerful voices in contemporary rock 'n' roll music today. Songs such as "The Desert," "Only You ," "Hold On," and "Over the Line" have enhanced his reputation with a growing number of fans.
Typical comments on his first entrance in the public areana of radio: “Love your voice” I Love Your sound” “Unique” Hauntingly Perfect” He loves to write popular songs and has tree albums playing on all major venues: Only You, Over the Line and In Another World, his first Group, “Wildfire” has reformed as “Ya On Fire” __ George Thomas’s video “Getting Married Tonight” caused a tsunami of controversy because he incorporated photographs of same sex couples who married as part of his video. I thought it was the only fair thing to do!, He said.

Read more: George is a x school teacher in Boston and has won various awards in
Commercial Art shows and Film festivals. When question about his greatest achievement and joy in life: That’s easy!, raising my children.

This is just a small sample of responses from a trial run on Jango.Com, with over
Five hundred fans signing up in three weeks!
George Thomas and Ya On Fire are heating up the air waves
with a fresh approach to the traditional love song.

“Love the Voice and Beat” “Cool, Can’t Wait to hear
More"
Read More...
I am presently working on the "Ten Years to Solve World Hunger project". This is a project I begun while a student at Clark University studying Social Engineering. Part of solving world hunger is the creation and building of Life Towers in cities across the globe. Life Towers are sixty story buildings which will transform the way food and energy are produced today!
Today with oil depletion staring us in the face and
the cost of other forms of energy skyrocketing new forms of food and energy production are necessary for our survival.
These LIFE TOWERS will be constructed in cities all around the world and they will not only produce enough FOOD to feed people year round but will also produce energy from solar and wind production to power these cities. The Towers will grow food in hydroponics and aqua culture systems. Not only will the Towers feed people they will also employ large segments of the population. This back up food supply can be ready in the event of any kind of disaster.
In Order to get a prototype up and running a world concert is necessary to finance its completion.

"Life Towers" will transform the face of this planet and herald the beginning of mans future development.

We will either find a way,or make one!- Hannibal