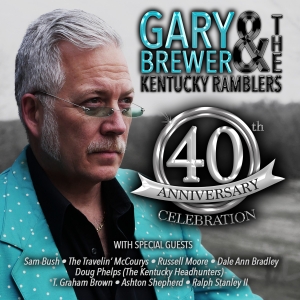 "Wow! It's hard to believe it's been 40 years since I started the band. Most kids my age were just happy playing ball or riding their bike. I had a different plan. I wanted to make a living as a musician and do my own thing. Not be a regular sideman jumping around, but be “The Man”. I didn't care then (and don’t now) to be the biggest star. I’ve always just wanted to make a good, clean living. With God’s help,
all these years later, millions of miles, 50 recordings, and drive/support from my family, I sit here today in my office at Brewgrass Entertainment, simply amazed and grateful for all of it; The ups and downs, the slow and fast times, all my fellow artists and friends along the way. It's very humbling to have just survived the music business and stayed in the running this many years. I am and have been very blessed my entire life. Today, I'm so very proud to have my Father and both my sons all touring together. Wayne and Mason both have really become excellent musicians and singers. They have been in the music business all of their life and can play any instrument. I know that my music and The Brewer Tradition will be in good hands for the future. ” -Gary Brewer

I wrote this tune about the holler my dad was raised in. A place I have gathered a lot of inspiration from for my original songs. I chose The Travelin' McCourys for this tune because I felt it really fit their family tradition and style.

This is a tune I wrote about a part of the country where I've spent a lot of time and love dearly. This song had great chart action when it was released; due to that, it has become a signature song for me.

This is a song I wrote about my Daddy. He has always been my hero, my rock, my best friend, and my biggest influence in life. What a blessed life I have. I chose Dale Ann Bradley for this tune for a number of reasons: her relationship with her Daddy, she's a Kentucky gal and her angelical voice!
Ladies and Gentlemen...Dale Ann Bradley! Need I say more?

The inspiration to write this tune came one stormy morning while lying in bed looking out my window. I chose Russell Moore for this one. Our Southern connection with rain made this the perfect choice.

This is a bouncy, driving tune that I wrote about Kentucky and the blues of everyday life. My dad helped me write this tune. Sam Bush was the only choice for this one, as we both share our
Kentucky heritage and history in song.

This is a tune I wrote that has that pure Country flavor. I chose Ashton Shepherd for this one. In my opinion, if you “Look it up”, she is Country flavor in my dictionary.

I wrote this tune while reminiscing about memories of visiting Papaw Brewer's. It was the title cut of my first album on Copper Creek Records, a division of Rebel Records in Roanoke, Virginia.

I wrote this song about my Dad's life growing up in the hills of Roan Mountain, Tennessee. Everything in this song was passed along to me by my Dad. I chose Ralph Stanley II to help out on this one. Me and Ralph ii have a great deal in common, as we both have been heavily influenced by our Dads. This song shares so many of those views; the family tradition and connection of what ‘home’ means to us.

I wrote this song many years ago. I have always considered it an answer to "What is BREWGRASS?"

I wrote this song about a popular saying that my dad has used for years: “talk comes cheap, but it takes money to ride the train!” I chose Country music Soul singer, T. Graham Brown for this one. T is a true Country music legend. From his voice to his professional courtesy..what a fine example of a Country music Christian.

One of my early original songs. I wrote this simply about how I feel when I'm in the mountains of home and why I'll never live in the big city lights. I chose Ashton Shepherd for this song. We have a lot in common. We both love God and the simple country life. We put our families first (before our careers), write our own material, and enjoy eating good country cooking! Man, “Sounds So Good”!

This song was one of the first couple songs I ever wrote. I feature it on nearly every show still today.

One of the first tunes I ever wrote. This was featured on the first album I recorded. I pulled Doug Phelps in from the Kentucky Headhunters for this one. He nailed it!

I wrote this tune while reminiscing about my visits to Papaw Brewer's and the farm work and chores I learned there. One of the chores was milking so I sat down with my guitar and a pencil and wrote this piece about Sally-O, the milk cow. Due to early radio success, this is one of the songs that was responsible for my first Guest Star Appearance on The Grand Ole' Opry.

Gary Brewer & the Kentucky Ramblers (GBKR), a family band that goes back 6 generations into their musical roots, has performed in all 50 US states, Canada, and Europe extensively since being formed in 1980. GBKR takes the stage performing Bluegrass originals, Country music classics, foot-stomping Old-time Mountain Music, and good ole Gospel hymns; offering a little something for everybody. Gary has stamped their style of music as “Brewgrass”.

During his music career, Gary Brewer has recorded for multiple major record labels including Copper Creek releasing 29 studio albums and a double live album (recorded on one of his European tours). Now, he has released an additional 21 albums on his own label, SGM Records (Stretch Grass Music). Among the SGM releases is “Kentucky Headlines and Heartbreak” including 3 tracks. One of the tracks titled “The Death of Floyd Collins” was the soundtrack for “The Floyd Collins Story” movie (released on Peridot Pictures). GBKR’s 2018 release, “Vintage Country Revival” brought great success charting at #1 on the Global Country Radio Charts and was included on the 1st round ballot in the 61st GRAMMY Awards (for Best Americana Album & Best American-Roots performance).

Their most recent album on SGM “40th Anniversary Celebration” was released during the start of the COVID-19 Global Pandemic in May 2020. Climbing the Billboard Bluegrass Albums Chart to the #1 spot multiple times and holding in the top 5 for over 70 weeks, this CD Release garnered massive media attention for the group. The lead single (Goin’ Up Shell Creek ft. The Travelin’ McCourys) was premiered by American Songwriter saying “The track is a well written and pristinely executed Bluegrass tune that keeps its energy up without losing control. The song comes equipped with every element it needs to be a complete and cohesive piece of music.” Instead of a traditional CD release party, GBKR opted for a virtual one that included the full album along with studio footage and commentary from various music icons: Paul Schiminger, Jamie Dailey, Larry Sparks, Russell Moore, Sam Bush, Chris Joslin (Executive Director of the Bluegrass Hall of Fame), Little Roy Lewis, Greg Cahill, J.P. Pennington, and many more (all with kind words for Gary). The virtual CD release party was premiered by Bluegrass Life. The album critically praised by countless outlets, Midwest Record Reviews said “40th Anniversary Celebration” is “The Biggest Bluegrass record since ‘Dueling Banjos’!” GBKR was featured on/in the following outlets due to GBKR’s 40th Anniversary and its CD Release: Medium Magazine, Thrive Global, Music Row, NewsBreak, Take Effect, Bluegrass Today, Roots Music Report, The Bluegrass Situation, Vents Magazine, Bluegrass Unlimited, The Bluegrass Standard, and more. “40th Anniversary Celebration” was included in 6 categories on the initial round ballot for the 63rd GRAMMY Awards and up for “Collaborative Recording of the Year” at the 2020 IBMAs. Needless to say, even without having the opportunity to promote their 40th Anniversary CD on the road, GBKR had one of their most successful years yet in 2020.

The entire Brewer clan has come by their musical talents honestly. They have true respect for their roots that reach back to the 1920s including third-generation Brewer, Finley J. “Pap” Brewer Sr., performing with the Original Carter family. Because of such a great love for music being passed down for generations, Gary is a strong traditionalist. He has toured alongside many Bluegrass music legends throughout his career. He esteems being the last person to have commercially recorded with the late and great Bill Monroe on his “Guitar” CD one of his highest accomplishments (later resulting in Gary becoming a Guitar Player of the Year finalist at the IBMAs).

“Gary is a great guitar picker and has a great voice. Him and his dad have the best show on the circuit!” -Jimmy Martin (The King of Bluegrass)

Though he is a Bluegrass music veteran, Gary is the type that isn’t afraid to branch out to other genres. Gary has had chart-topping songs/CDs in Bluegrass as well as Americana, Old-time, Country, Gospel, and even Rock! Gary has been accredited as one of the only Bluegrass performers to record and have international radio chart success with Rock classic covers of Elvis, CCR, and Kansas.

In addition to touring internationally, GBKR produces multiple events and concert series. To kick off their 40th Anniversary tour, the guys ran a 6-month artist residency at their own live music venue (located inside KY’s largest outlet mall - The Outlet Shoppes of the Bluegrass, Simpsonville, KY), Brewgrass Entertainment. Each show featured special guest acts, along with a performance from Gary Brewer & the Kentucky Ramblers. Before opening their own venue, GBKR hosted five seasons of their Winter concert series “Friday Night Bluegrass” (Shepherdsville, KY). GBKR currently hosts their bi-annual community music festival “Shin-dig in the Park” (Shepherdsville, KY). Gary and his boys are keeping Bluegrass music alive in the Bluegrass state.

With the global pandemic postponing most tour dates for GBKR’s 2020 40th Anniversary Celebration Tour, the guys will be heading back on the road to resume and complete the tour in 2021.